They’ve quarreled a lot in the past, but this dispute is far from “Who picks up the lunch tab at the shawarma place?”

This time, Captain America and Iron Man are battling over who has power over the superpowered.

In the new issue of Entertainment Weekly, we take you behind the scenes of the airport clash between two landmark heroes in Marvel’s upcoming Captain America: Civil War, as the forces aligned with Chris Evans’s red, white, and blue supersoldier turn against those allied with Robert Downey Jr.’s armor-plated genius, billionaire, playboy philanthropist.

Cap stands for independence from anyone’s control and following your own sense of right and wrong, while Iron Man, regretful over the chaos he unleashed in Avengers: Age of Ultron, supports with the governments trying to impose control over those who say they only mean well.

“In most of the movies, there’s no question who we should be siding with,” Evans says. “We all agree Nazis are bad, aliens from space are bad. But this movie’s the first time where you really have two points of view. It becomes a question of morality and I don’t think [Cap] has ever been so uncertain with what right and wrong is.” 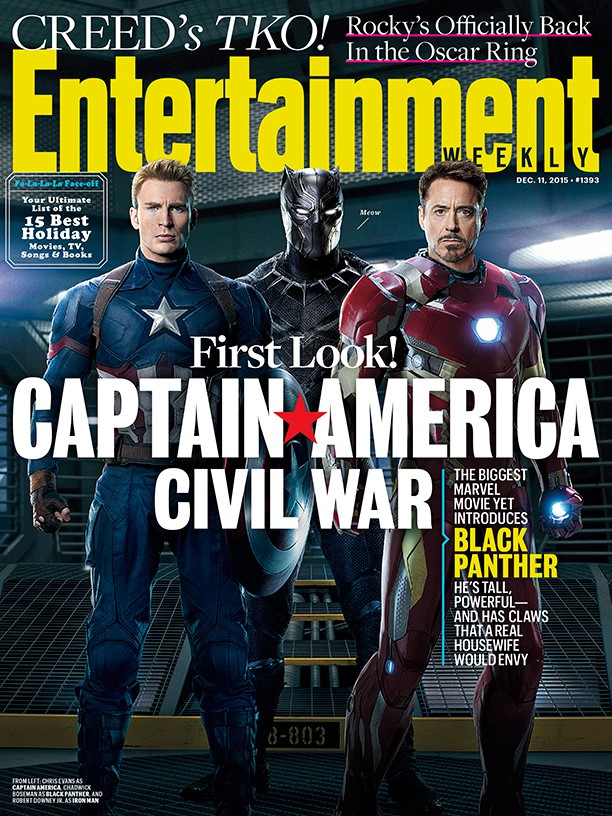 EW also explores a new character fans have been clamoring to see for a long time: Chadwick Boseman’s fearsome Black Panther, the historic first black superhero in the Marvel Comics canon whose allegiance in the film is sought by both sides.

What are the teams in the May 6 action-adventure? We’ll tell you who lines up on which side – including a few not glimpsed in last week’s trailer.

We’ll also answer another burning fan question: Just which characters are in this movie – and which ones are definitely sitting out the fight?

In the print edition, Boseman also explores the details of Black Panther’s intimidating costume, from the eyes to the claws, and Marvel Studios president Kevin Feige walks us through the connection between the birth of the MCU and the publication of the 2006-07 Mark Millar-scripted comic series that inspired this movie, the 13th since Nick Fury informed Tony Stark: “You’ve become part of a bigger universe. You just don’t know it yet.”

Look for all this on newsstands now, and even more online at EW.com.

Get the hottest tech essentials up to 90% off at Shopee’s Gadget Zone this June 23!

“The Accountant” Has a Dark, Secret Life in Riveting New Thriller