George Clooney (“Gravity,” “Up in the Air”) stars in Columbia Pictures’ new film “Money Monster” as Lee Gates, the host of a financial news program who comes face-to-face with one of those regular guys who’s determined to hold someone accountable, by any means necessary.

“The world of money has gotten out of control,” warns Clooney. “When things go wrong, you don’t actually understand what it is that went wrong – and the regular guy gets screwed.” 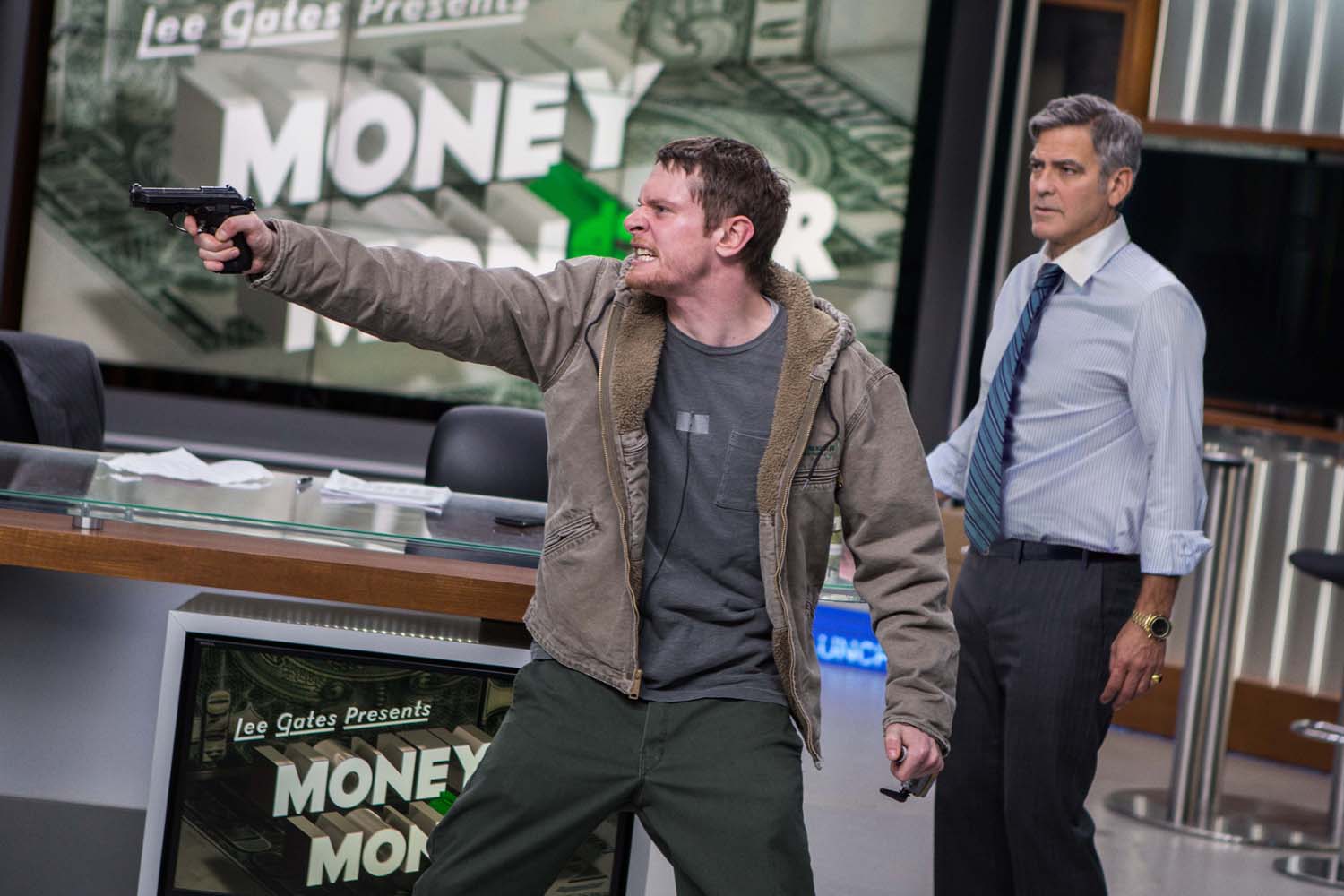 Lee Gates is a celebrated stock picker and famed host of the titular financial television show, who darts and dances around his set, shouting investment advice and punctuating market talk with silly props and sound effects. “‘Money Monster,’ the show, is pretty ridiculous,” says director Jodie Foster. “It’s a financial news show, but there’s lots of props, old movie clips, bells, whistles, and whoopee cushions that Lee Gates has come up with in order to explain the financial market. He sings and dances with beautiful girls, wears different hats – all so he can dispense stock trading tips – but it has left him with a buried sense of self-loathing. The film presents him with an impossibly unexpected chance at redemption.”

Clooney adds that all of that showmanship is hiding a deep-seated contempt for the show’s own audience. “There’s a cynicism that reeks through these shows,” says Clooney. “You watch these guys behind their desks, telling you where to put your money – and when you do and you lose it, they go, ‘Well, that’s what happens.’”

When one of Gates’ heavily hyped stock predictions, Ibis Clear Capital, mysteriously plummets, his blatant complacency is placed front and center for the world to see as Kyle Budwell (Jack O’Connell), a distraught investor, hijacks a live “Money Monster” broadcast to hold Gates’ feet to the fire. 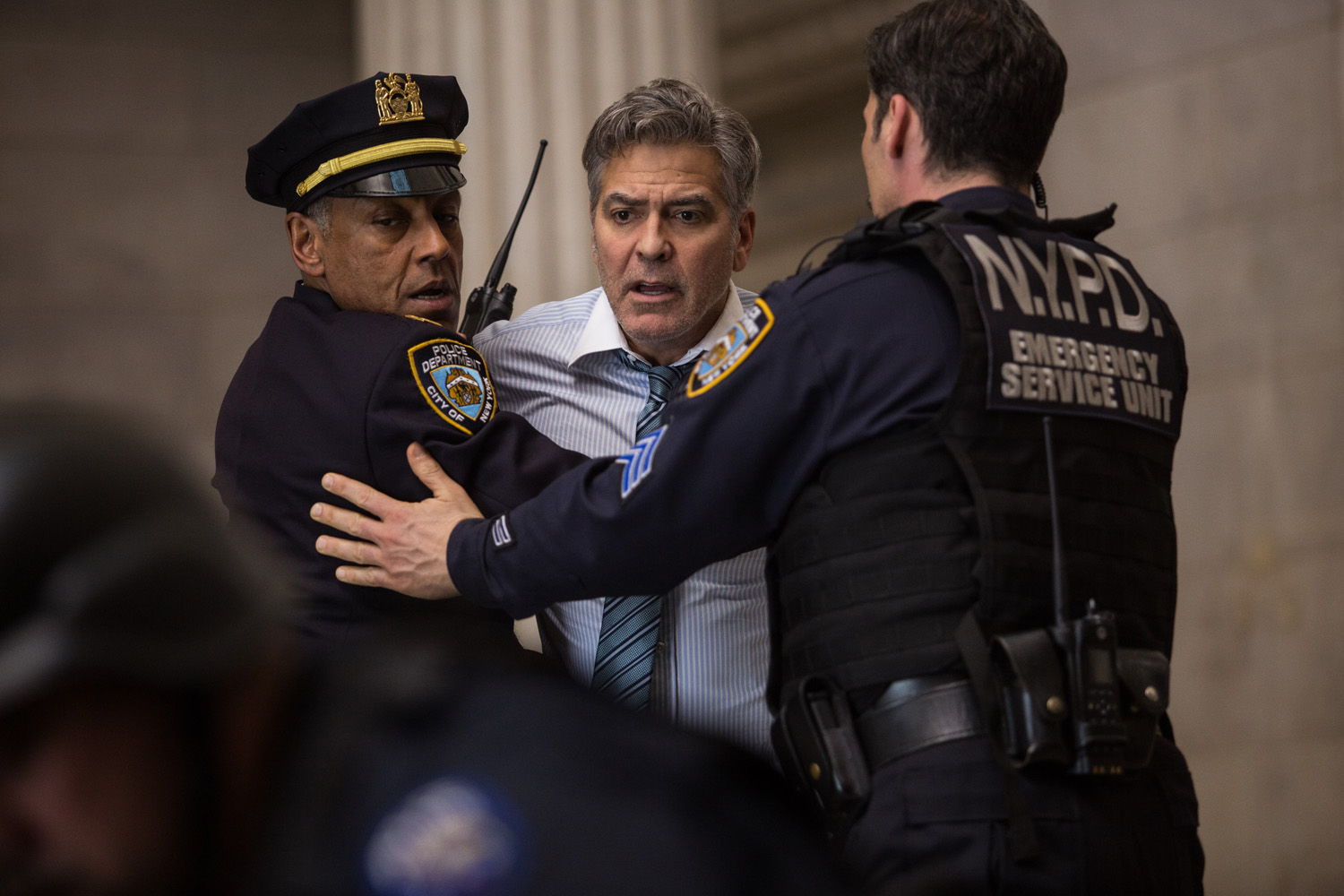 To inhabit the character of Lee Gates, Clooney created the irreverent, madcap and larger-than-life reality television show personality. “Lee Gates is a bit of a showman,” says Foster. “It was George’s idea that Lee Gates should open the ‘Money Monster’ show with a dance. When he first came to rehearsals, he said, ‘I’m just going to need a half an hour to figure out the dance thing.’ And I replied, ‘I think you’re going to need a little bit more.’ So, we had the choreographer there and he got into it.”
“George really got into making a complete and total ass out of himself,” continues Foster. “I do love that about him. There’s something about the absurdity of seeing this middle-aged white guy walk on and do this like crazy hip-hop dance…You can’t help but laugh, and think his character is a buffoon.”
The idea that the entire crisis unfolds on live television was another intriguing aspect for Clooney. “I grew up in live TV – every day of my life for my first 16 years was live TV, because my father had a live variety show and did the news live,” says Clooney. “Later, I sort of forced NBC to do a live episode of ‘ER,’ and I did ‘Fail Safe’ as a live production. This was before other shows started to do really risky television; I thought the only thing that TV could do that films couldn’t was live. It’s flying without a net; that’s exciting.”

Clooney’s achievements as a performer and a filmmaker have earned him two Academy Awards®, four Golden Globes including the Cecil B. DeMille Award, four SAG Awards, one BAFTA award, two Critics’ Choice Awards, an Emmy, and four National Board of Review Awards. When Clooney received his eighth Academy Award® nomination, he earned a special spot in the Oscar® record books. He has now been nominated in more categories than anyone else in Oscar® history.

Creepy Levitation in New Poster of “Ouija: Origin of Evil”