CULVER CITY, Calif., April 14, 2016 – Money Monster, the upcoming film from TriStar Pictures starring George Clooney and Julia Roberts and directed by Jodie Foster, has been named an Official Selection – Out of Competition at the 69th Festival de Cannes, which will be held from May 11 – 22, 2016.

The gala presentation for Money Monster, which is Julia Roberts’ first film to be featured at the Festival, will take place on Thursday, May 12, at the Grand Théâtre Lumière. 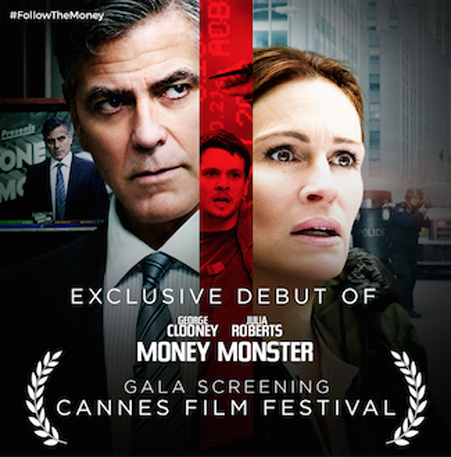 In the real-time, high stakes thriller Money Monster, George Clooney and Julia Roberts star as financial TV host Lee Gates and his producer Patty, who are put in an extreme situation when an irate investor who has lost everything (Jack O’Connell) forcefully takes over their studio. During a tense standoff broadcast to millions on live TV, Lee and Patty must work furiously against the clock to unravel the mystery behind a conspiracy at the heart of today’s fast-paced, high-tech global markets.

Peter Parker Out To Prove Himself in New “Spider-Man: Homecoming” Trailer