ReZirb
Home Entertainment Owen Wilson: Miniature-Sized Hero In “NIGHT AT THE MUSEUM: SECRET OF THE... 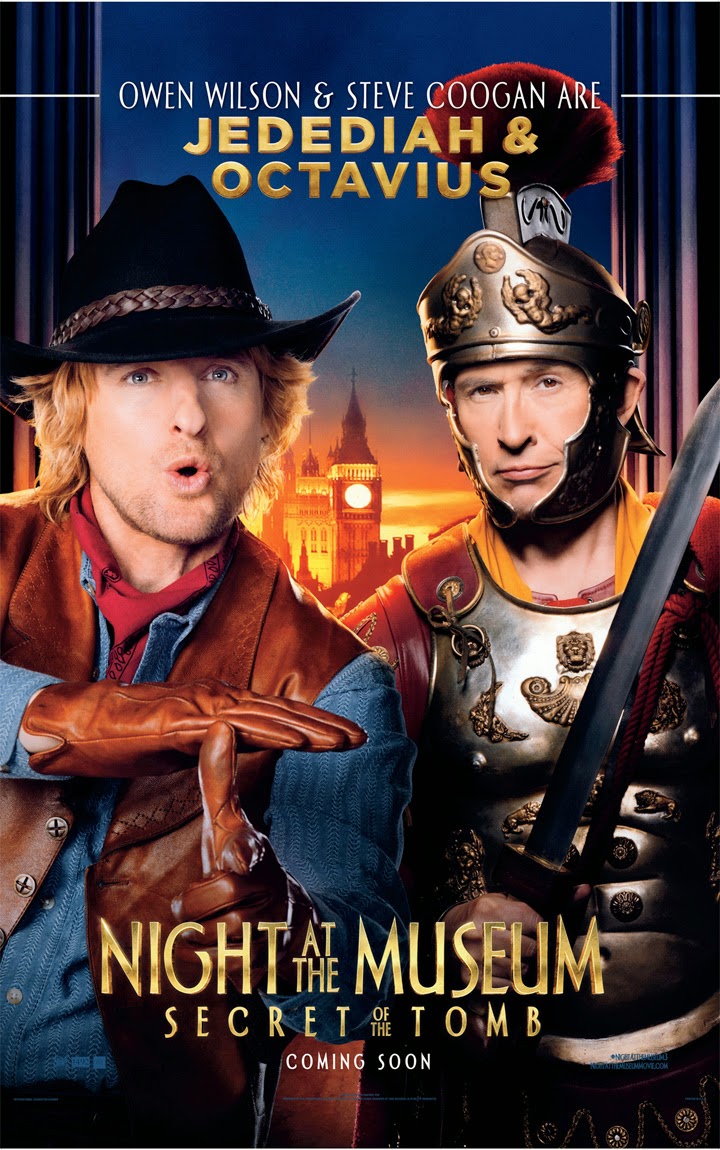 In “Night at the Museum: Secret of the Tomb,” Ben Stiller returns as security guard Larry Daley, together with a highly impressive group of comic actors. Owen Wilson is back as the irrepressible miniature cowboy Jedediah, along with his equally small buddy, the Roman general, Octavius, (Steve Coogan). Both are embroiled in the latest adventure, directed by Shawn Levy. As always, the legendary artifacts at New York’s Museum of Natural History come to life, but this time, problems arise when they start malfunctioning. The magic that keeps them alive is waning and Larry’s friends are in danger. Saving them involves an urgent trip to the British Museum in London.

While the first two films were set in the U.S., the new adventure takes the team to the United Kingdom. Owen Wilson and Steve Coogan, reprise their roles as the duo of American cowboy Jedediah and Roman Centurion Octavius, both miniatures from historic dioramas. They’re the smallest characters with the biggest friendship. Wilson says, “There has been an arc to our relationship. We started off sort of as adversaries, and now it’s evolved into more of a team. We’re practically a buddy comedy within a funny family movie.”

The friendship is all the more unexpected because the characters come from very different cultural backgrounds and eras. “There’s a brashness to Jedediah,” says Wilson, “that sort of runs up against and chafes the gentility of what Octavius represents.” The picture of civility, Octavius is a military leader from ancient Rome. He and Jedediah face their greatest peril yet when they fly through a museum air duct and find themselves in a Pompeii diorama where Mount Vesuvius is about to erupt.

On being funny, Wilson relates that “My dad had a great sense of humor and on both sides of my family, humor was the way that the family related to each other. My mom had a good sense of humor, but my dad was hilarious. My dad was the head of the public television station in Dallas and that was the first station to carry MONTY PYTHON. He really loved MONTY PYTHON. So I think that being around him and his friends growing up was very helpful for me. And though I didn’t have a background as a stand up comedian and as a child I didn’t ever think about becoming a comedian. In school I wasn’t really a class clown, but I would get into trouble and sometimes give colorful answers to what I perceived to be banal questions from teachers, and that would make the other kids laugh and sometimes I’d get the teachers laughing a little bit. So maybe there’s a little bit of that in my background.”

Returning to “Night at the Museum,” Wilson believes that like the movie, there is an underlying magical charm in the movie, “Apart from its great adventure, what’s also nice is that it’s led to an upswing in kids’ interest in museums – and the Natural History Museum. So that’s a great thing that’s happened and I think that is really because of Ben and Shawn and the way Shawn’s able to mix the laughs with something that can be very touching. He just seems to have that touch.”

One of the most gifted and versatile actors of his generation, Owen Wilson has starred in a slew of hit films. His early credits include “The Cable Guy,” “Armageddon” and “Permanent Midnight.” He further starred “Bottle Rocket,” “Rushmore,” “Zoolander,” “Marley & ME,” “Wedding Crashers,” “Meet The Parents,” “Starsky & Hutch,” “The Internship,” “The Royal Tenenbaums,” (for which Wilson and Anderson received a Best Original Screenplay Oscar nomination), “The Darjeeling Limited,” “Fantastic Mr. Fox” and most recently, the highly praised film, “The Grand Budapest Hotel.”

“Night at the Museum: Secret of the Tomb” opens January 8 in cinemas nationwide from 20th Century Fox to be distributed by Warner Bros.

Pitbull’s “CELEBRATE” With The “PENGUINS OF MADAGASCAR”

James McAvoy Amazes as Man with Multiple Personalities in “Split”