For Fil-Am actor Dave Bautista (Spectre, upcoming Blade Runner 2049), returning to the Guardians fold in Marvel Studios’ Guardians of the Galaxy Vol. 2 was a chance to reprise a character he truly enjoys playing.

“What I really love about Drax is he’s not what you’d expect from reading the comics,” Bautista says. “Everybody was expecting one thing, and we gave them another. It makes it more interesting. It’s easy just to be the big guy who’s always growling at people and intimidating people. We’ve seen it a million times. But when you get the same guy who looks the same way but just says the most ridiculous things that make you laugh, it makes him more interesting.” 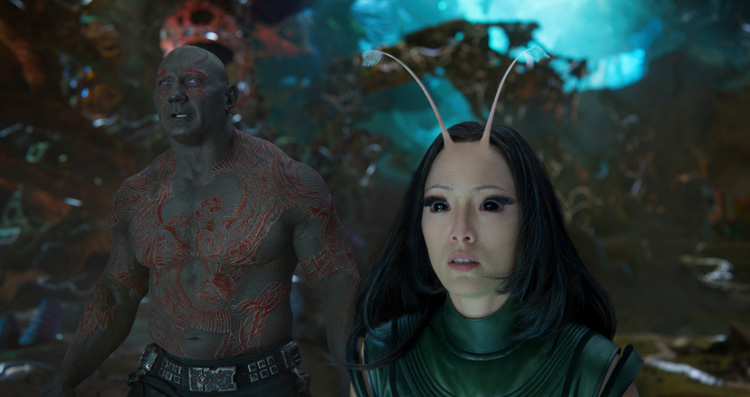 Continuing, he adds, “And he’s also got that side to him that’s just all heart. He’s still heartbroken over the loss of his family. And I love that dynamic, man. I love playing with that. It’s challenging. It makes it’s interesting. It makes the character loveable and it makes people connect to him.”

In the movie, Drax develops a friendship with a new character, Mantis, played by Pom Klementieff. Describing their relationship, Bautista says, “It’s hard to think that Drax would have some innocence to him but he really does, and it comes out in this film. That’s in the connection he has with Mantis. There’s a lot of innocence in both characters. They’re almost like two kids who find each other and become playmates. They just connect on a certain level that they can’t connect with anybody else. They’re both suffering from some pain and learning new things and new feelings, new experiences. They’re going through that together and that’s where the connection is.”

The opportunity to work with Chris Pratt again was a plus for Bautista. “On a personal level, I think everybody involved on this film will agree that we just love him,” Bautista says. “He’s just such a good dude; a good, kind-hearted person. I can’t say enough good things about him. He is what you see. There’s nothing superficial or pretentious about Chris. He’s just got a great energy about him and he’s a very positive person. And that all trickles down. When you get number one coming to set who’s always in a good mood, it’s hard to be that guy who is in the bad mood or complaining.” 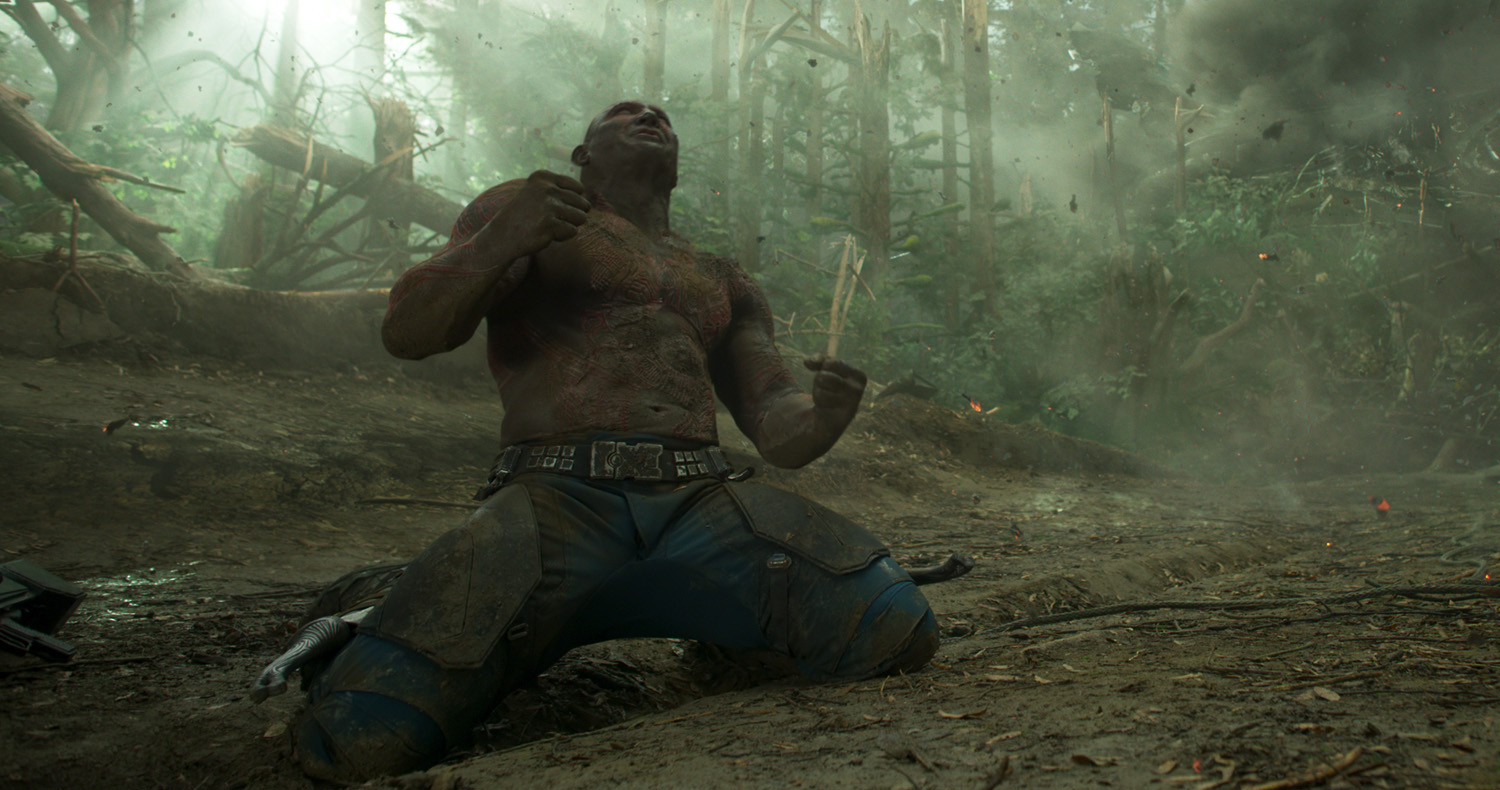 Working with director James Gunn once again proves to be a positive experience for the actor. “It’s great because the writer is there and the director is there, all in one person,” says Bautista.

He adds, “Drax is the vehicle for James Gunn’s twisted, witty sense of humor. I love when I’m shooting and delivering stuff that I can hear James off in the distance laughing because I know that it is what he wanted. That it is what he was expecting out of the dialogue that he wrote. That in itself makes me feel really good because I love giving him what he wants.”

Bautista is confident that audiences will connect to the film on a personal level. As he says, “The first film was more about people coming together for the greater good. And I think this film is more about relationships with people. It is the story of a family. Your family doesn’t always have to be blood family. They can be chosen family. So I think this is more of a relationship film, and everyone can relate to that.” 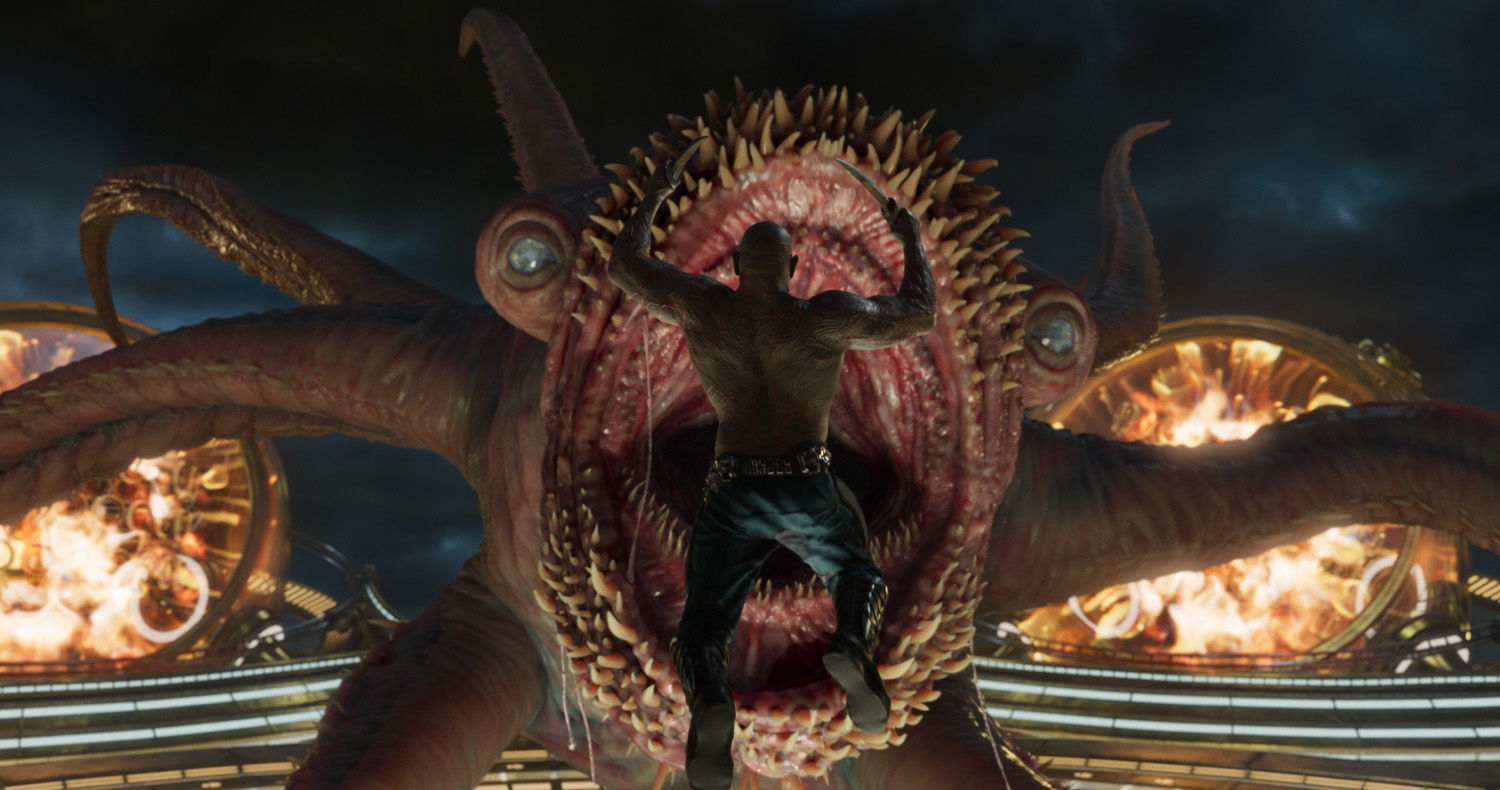