(New York, NY – 15 February, 2017) – The popular Smurfs characters are encouraging children, young people and adults to make the world happier, more peaceful, equitable and healthy with a campaign launched today by the United Nations, UNICEF, and the United Nations Foundation.

The “Small Smurfs Big Goals” campaign is designed to encourage everyone to learn about and support the 17 Sustainable Development Goals which were agreed on by all 193 member countries of the United Nations in 2015. It kicks off with the launch of a Public Service Announcement video inspiring viewers to champion the Goals, which include ending extreme poverty, protecting the planet and giving everyone the chance to enjoy peace and prosperity.

The public can also join “Team Smurfs” by visiting the SmallSmurfsBigGoals.com website to find out how they can contribute to achieving the Goals; discover which goals are best suited to their interests; raise their voices for a better world for all; and share information, ideas and images on social media.

“The entertainment industry moves the hearts and minds of people of all ages, and the UN thanks our friends at Sony Pictures Animation and the Smurfs for this creative effort to mobilize support for the Sustainable Development Goals,” said Maher Nasser, Director of the Outreach Division in the United Nations Department of Public Information. “We hope this campaign will motivate millions of young people and their families to do their part to end poverty, reduce inequality, and protect our planet – three key aspects that will lead to the well-being and happiness of all people.”

Team Smurfs will rally behind the 17 Goals through to the International Day of Happiness on 20 March 2017 when the campaign will culminate in a celebration at United Nations Headquarters in New York to mark the occasion. This year, the International Day of Happiness will highlight the Sustainable Development Goals as building blocks of happiness. Voice actors from the upcoming animated movie Smurfs: The Lost Village will attend to honour youth and children who have played a role in raising awareness of the Sustainable Development Goals.

“We know that children and young people are some of the world’s most passionate advocates on issues that matter to them the most. We must continue to find new ways to empower them to help achieve a world free from inequality and injustice for every child. This campaign will give children and young people the platform they need to have their voices heard,” said UNICEF Director of Communications Paloma Escudero.

“The campaign message focuses on the notion that every one of us can make a difference, regardless of our size,” said Veronique Culliford, the daughter of Peyo, who created the Smurfs in 1958. “It’s an honor and privilege for The Smurfs to support the United Nations and to continue our longstanding relationship with UNICEF.” 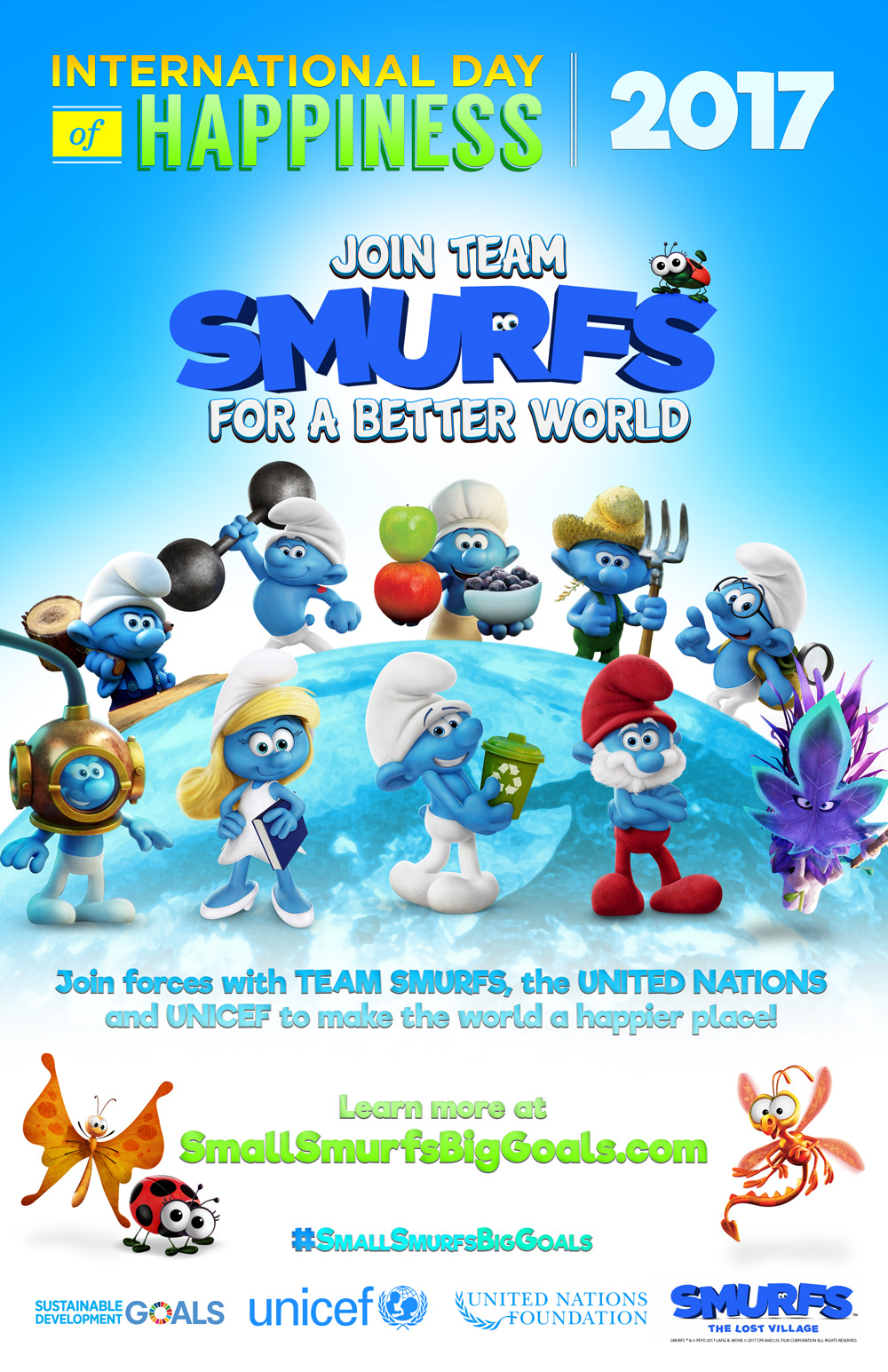 “All of us, even a small Smurf, can achieve big goals!” added Demi Lovato, who voices Smurfette in the upcoming animated movie Smurfs: The Lost Village.

The “Small Smurfs Big Goals” campaign will be localized in 14 different languages and promoted across Sony Pictures Television Networks’ flagship channel brands such as AXN, Sony Channel, Crackle, Animax and Pop available in 178 countries, including their on-air, online and social media properties.

ABOUT THE SUSTAINABLE DEVELOPMENT GOALS
In September 2015, UN Member States unanimously adopted the 2030 Agenda for Sustainable Development, focused on the three interconnected elements of: economic growth, social inclusion and environmental protection. With 17 Sustainable Development Goals (SDGs) at its core, the Agenda is universal, integrated and transformative and aims to spur actions that will end poverty, reduce inequality and tackle climate change between now and 2030.

ABOUT SMURFS: THE LOST VILLAGE
In this fully animated, all-new take on the Smurfs, a mysterious map sets Smurfette and her best friends Brainy, Clumsy and Hefty on an exciting and thrilling race through the Forbidden Forest filled with magical creatures to find a mysterious lost village before the evil wizard Gargamel does. Embarking on a rollercoaster journey full of action and danger, the Smurfs are on a course that leads to the discovery of the biggest secret in Smurf history! The feature is directed by Kelly Asbury, produced by Jordan Kerner and Mary Ellen Bauder Andrews, and written by Stacey Harman and Pamela Ribon, based on the characters and works of Peyo.