Parris Goebel is the reigning queen of the international hip hop dance scene. The triple award-winning dancer and choreographer from New Zealand has several times won the world championships with her The Royal Family megacrew and famed all-female crew ReQuest at competitions held in the U.S. Her explosive, exact and erotically charged movement style pulsates with the rhythms of Maori and Polynesian dance traditions she learned growing up in Auckland: hip hop as ancestral soul.

Jennifer Lopez, who saw Goebel dance on video, was so impressed by her elbow-popping, foot-stomping, hip-circling moves she hired the 23-year-old diamond-toothed Kiwi with the bleached blonde hair to choreograph her 2012 Dance Again world tour. Since then, Goebel has worked with Canada’s Cirque du Soleil, choreographing its 2013 Michael Jackson tribute show in Las Vegas, hip hop’s Missy Elliott and Korean pop star, Taeyang. An electrifying performer in her own right, Goebel danced with J-Lo on the season 11 finale of American Idol and appeared in the fifth installment of the U.S dance film franchise, Step Up. Earlier this year, Goebel choreographed Nicki Minaj’s PinkPrint tour and a video for Beyoncé. 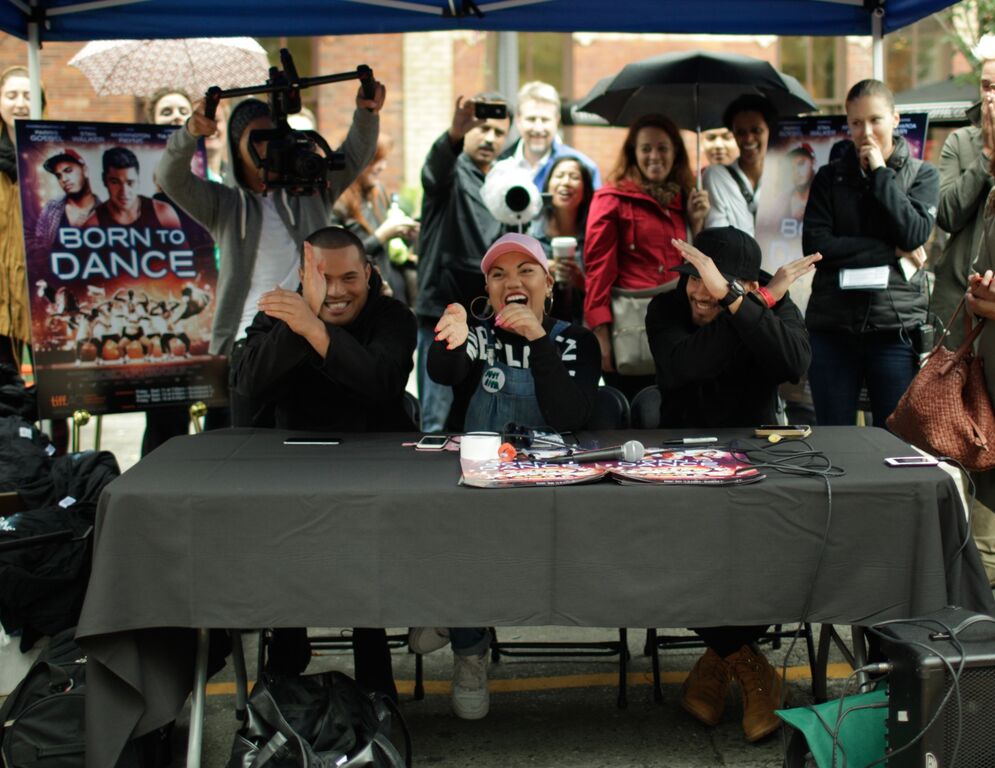 Her latest venture is Born to Dance, New Zealand’s first hip hop dance film, directed by actor Tammy Davis of Whale Rider and Black Sheep fame from a script by acclaimed Maori writer Hone Kouka, Steve Barr and Casey Whelan. Goebel choreographed the energized dance sequences performed by members of her own Palace Dance Studios, including Tia-Taharoa Maipi making his screen debut as Tu, the film’s dance-mad male lead. Goebel dances herself in one sequence in which she raunchily fronts a female crew that decimates the men in a forward-charge dance battle.

Look at those smiling faces, those adoring eyes, all focused on you. You are a hip hop dance role model! What does that mean to you?

When you work so hard at something you gain a profile, and there are pros and cons associated with that. I get a lot of attention and sometimes it’s hard for me to really handle that. You don’t really know what to do when everyone’s looking at you. But the positive thing about that is being able to reach and touch kids from all over the world. I didn’t aim to be a role model or someone that people want to look up to. That wasn’t my goal. But to be in this position now I have this responsibility to tell the kids and to show the kids that no matter where you are from, what you look like or what age you are, you can do whatever it is you want to do if you put your mind to it. I just feel this huge responsibility about doing that. So it’s more than the fame. It’s hoping that kids will look at me and say, ‘If she can do it then I can do it, too.’

Why hip hop and not any other form of dance?

It just spoke to me. I believe that we are all born with a purpose and I was born to do this. It definitely is it. It’s so effortless to me. I do enjoy other styles but for me hip hop is in my blood. The first time I took a hip hop class I just lit up. I’ll never forget it. It was like love at first sight. When I went to that first class, I was like, ‘This is what I love, and I’m going to do it.’ I was only 10 but I just knew. It was like a switch went off, and I will never forget that feeling. Knowing all of a sudden that this is what you were born to do is a very cool feeling and no one can give that you. No one can tell you that this is something you need to do. You’ve got to discover that in yourself.

Tell me about being a female in the hip hop industry. Does it pose challenges?

I mean being a female is a challenge in itself. I talk to women all over the world about this, actually, and when I come across specific women who are also similar to me in the sense of trying to get somewhere with their talent, I always connect with them on this, and they always express to me how hard it is to really make a name for themselves or get a job. Even just to make noise in the industry is hard for a female, for some reason. But I feel it is like that with anything – sport, art, business. A woman just has to work a lot harder just to make noise and get herself noticed. That’s my personal opinion, anyway.

Now that you are making noise, how are people in your industry reacting?

For me to be in this position is really cool – you know, like? I’m really comfortable where I’m at in the sense of feeling like people are really paying attention to what I’m doing, what I’m saying. I’m in a position where, whatever I do, people are going to watch and they’re going to listen, whether they like hip hop or not. So that’s an amazing power to have, and I know that I can change the world with that power. It was a struggle at the beginning. But now, at this age, and at this time of my life, I really don’t feel the struggle any more. I’m in a really confident place where I worked hard as a female and where people, when they think of strong females in the hip hop industry, think of me. I’m really happy about that.

How did New Zealand, of all places, become an epicentre of the world-wide hip hop dance culture?

When I was growing up, hip hop wasn’t as popular but I worked really hard to make it so. I opened a studio to give an opportunity for other kids to shine. I’ve poured my heart and soul into my studio and the kids who dance there. I teach my kids to work really hard and to be the best they can be. So for me their best is good enough. And their best so happens to be the best in the world. Which is crazy, right? But being the best in the world doesn’t really matter. As long as it’s their best. That’s always the goal. But it is really cool that they’ve reached a level where they’re kind of like killing the game internationally. 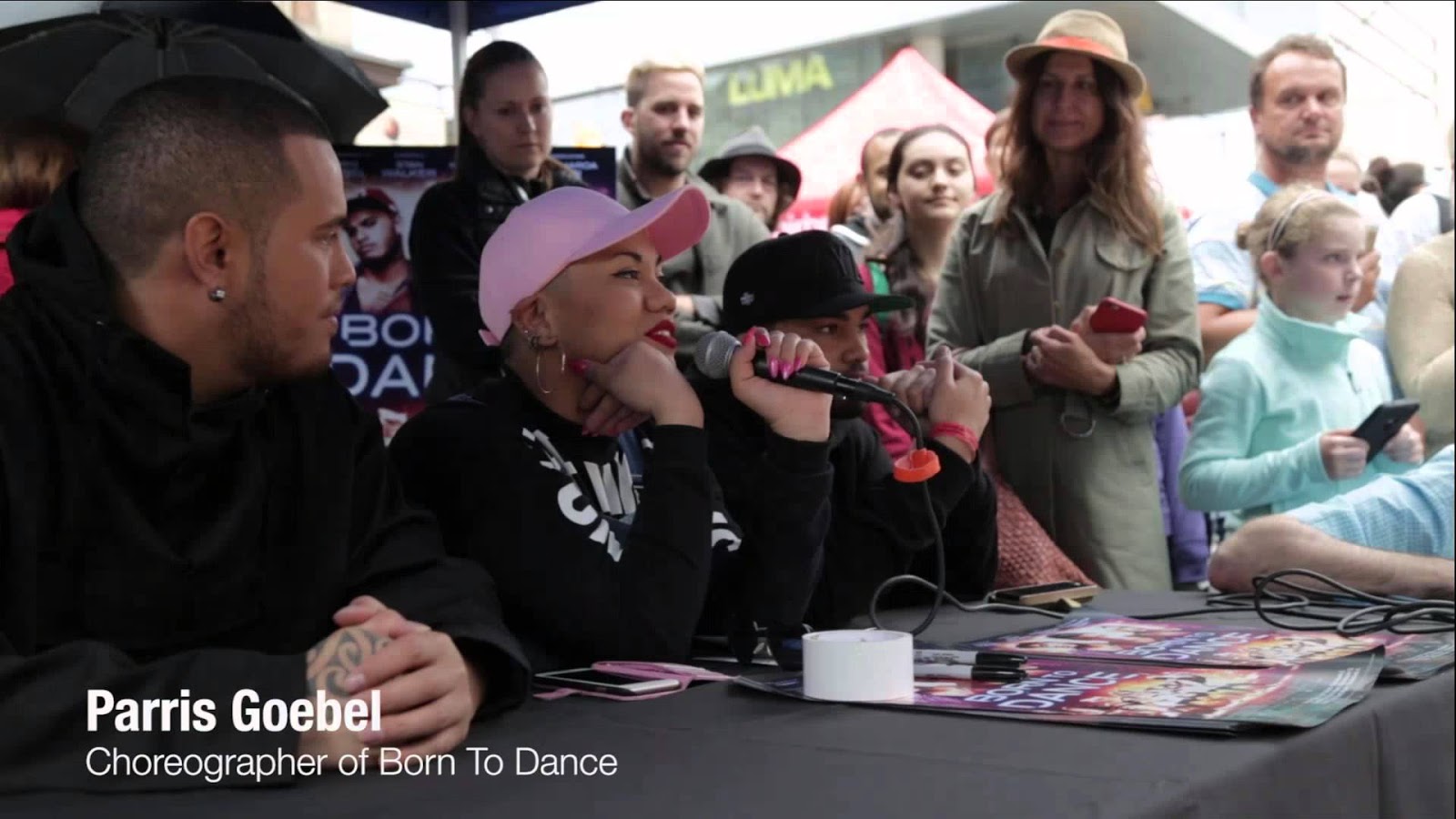 How did you first get the attention of Jennifer Lopez, Cirque du Soleil and other artists who have hired you to choreograph their shows?

All through YouTube, actually. I would say that 90 percent of my work has been booked through YouTube. I’m a YouTube baby. Like, I was born into that, and my involvement in the industry basically has come from me posting my work on YouTube. You know, ‘Hey, this is me. I’m Parris. This is my style.’ And then I started getting a following, and my postings went viral, and artists started to pay attention.

I know you didn’t write Born to Dance but how much does the film, about a hip hop dancer who first gains attention on YouTube, mirror your own experience?

Not intensely, but I can relate to him. I’m also a young kid from New Zealand with a dream to make it in dance, so this is also my story. Before all this, before sitting here and being able to talk about myself as a successful person, 10 years ago I was just a young girl in New Zealand with a dream, a stereo in her room and a mirror, you know? No one knew my name.

Born to Dance showcases that style of yours. How do you think audiences outside New Zealand will react to the film?

I think people will love it. I mean, it’s hard not to like it, you know? Like, it’s for everyone. It’s for all ages, all ethnicities. And everyone can relate to it because everyone has a dream and a lot of people do come from nothing and make something of themselves. And everyone loves dance and on top of it is this growing fascination with New Zealand. People are drawn to our country, our culture and our talent. So I know for a fact that this film will do very well.

And how will it impact the future of hip hop dance, do you think?

I hope it’s going to do something cool. For me, the goal was to choreograph it in a fresh and innovative way not seen in a dance movie before. I wanted to take it from a different angle, and I did that. I hope that other artists and dancers who will be watching will be inspired to try something new as well. I for one have always wanted to dance my own path.

“Born To Dance” is released and distributed by CAPTIVE CINEMA. SHOWING MAY 25. NATIONWIDE!