(New York, NY –March 18, 2016) – Red, the starring animated character voiced by US star Jason Sudeikis in the upcoming “The Angry Birds Movie,” was named Honorary Ambassador for Green on the International Day of Happiness today at the United Nations.

The appointment of Red is part of the #AngryBirdsHappyPlanet campaign to help the world body promote the International Day of Happiness, which is observed on March 20 each year, and encourage people to take action against climate change and its impacts.

The International Day of Happiness recognizes that Gross Domestic Product alone cannot measure the wealth and well-being of a country’s population and a more inclusive, equitable, balanced and sustainable approach to growth and development is key to being happy.

After United Nations Secretary-General Ban Ki-moon named Red as Honorary Ambassador for Green, the campaign was presented to hundreds of young people in the iconic General Assembly Hall of the United Nations. 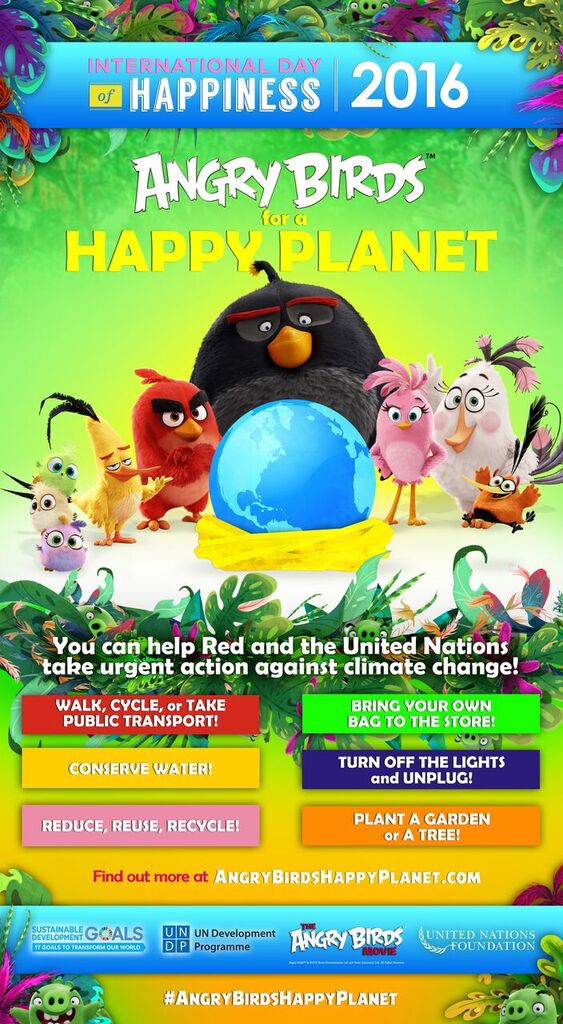 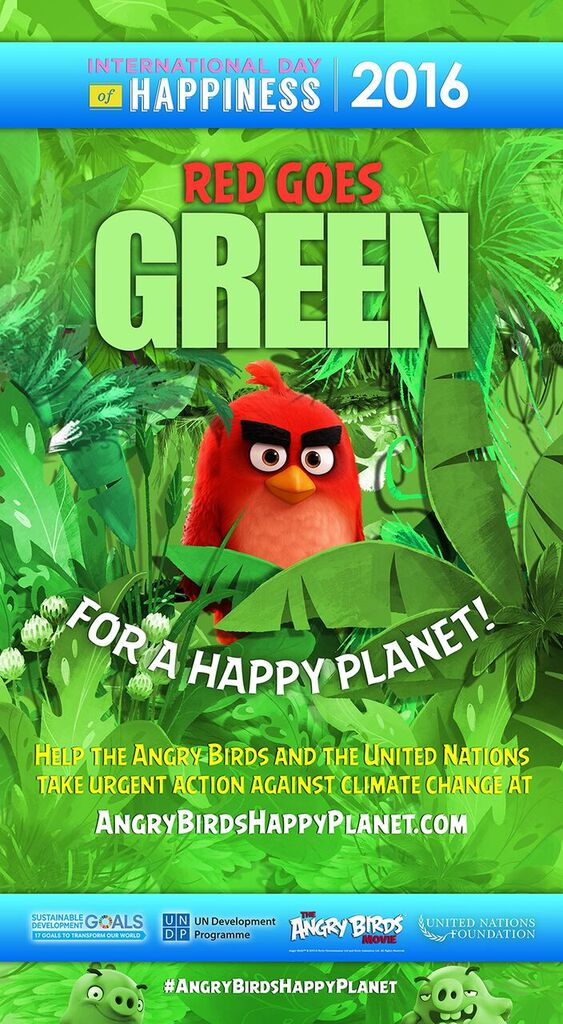 The presentation included the movie’s US stars Jason Sudeikis, Josh Gad and Maya Rudolph as well as producers John Cohen and Catherine Winder, who asked the attendees for their support to make the Angry Birds happy by doing their part to take action against climate change. They presented the “Help Red Go Green” materials including public service announcements created to support the campaign. By participating in the #AngryBirdsHappyPlanet campaign, individuals can make the Angry Birds happy and “Help Red Go Green” by posting photos and messages to show how they are protecting our planet by recycling, taking public transportation and conserving water, for example.

“The Angry Birds have entertained millions of people around the world — and now they are part of making the world a better place,” said UN Secretary-General Ban Ki-moon. “We are proud to give Red a reason to go Green. There is no better way to mark the International Day of Happiness than to have our animated ambassador raise awareness about the importance of addressing climate change to create a safer, more sustainable and happier future for all.” 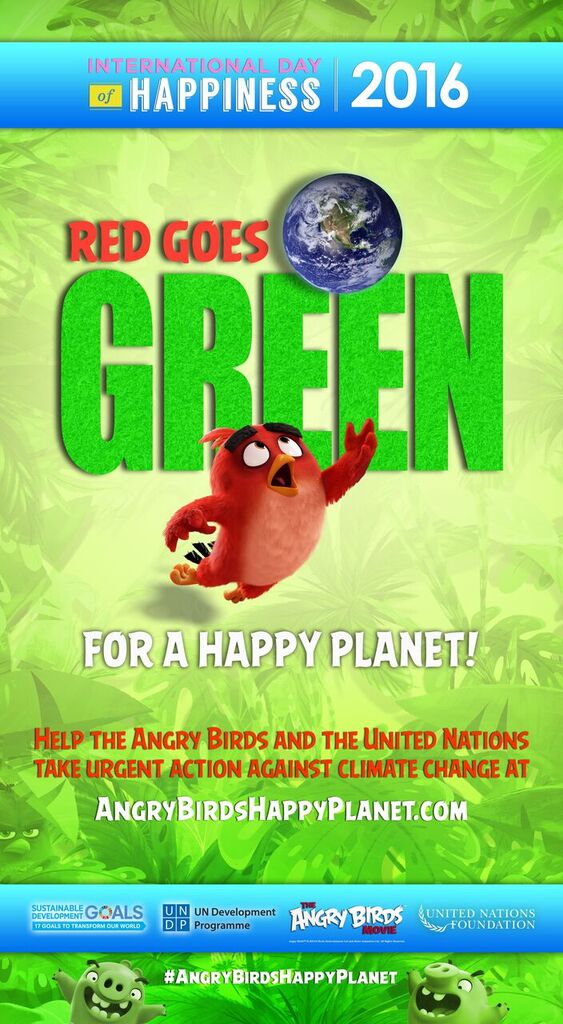 “We are incredibly honored that Red from ‘The Angry Birds Movie’ has been named as the Honorary Ambassador for Green. While Red may still look angry, we know that he’s smiling on the inside. As we say in our ‘Help Red Go Green’ campaign, nothing makes an angry bird happier than a healthy planet. In partnership with the UN, we are very excited to help raise awareness of critical global issues such as climate change,” said John Cohen, producer of “The Angry Birds Movie” and “Despicable Me.”

The movie takes us to an island populated entirely by happy, flightless birds – or almost entirely. In this paradise, Red (Jason Sudeikis), a bird with a temper problem, speedy Chuck (Josh Gad), and the volatile Bomb (Danny McBride) have always been outsiders. But when the island is visited by mysterious green piggies, it’s up to these unlikely outcasts to figure out what the pigs are up to.
Featuring a hilarious, all-star voice cast that includes Maya Rudolph, Bill Hader and Peter Dinklage, as well as Keegan-Michael Key, Kate McKinnon, Tony Hale, Hannibal Buress, Ike Barinholtz, Tituss Burgess, Jillian Bell, Danielle Brooks, Latin music sensation Romeo Santos, YouTube stars Smosh, Billy Eichner, and country music superstar Blake Shelton, who co-writes and performs the original song “Friends,” the Columbia Pictures/Rovio Entertainment film is directed by Fergal Reilly and Clay Kaytis and produced by John Cohen and Catherine Winder. The screenplay is by Jon Vitti, from a story by Mikael Hed & Mikko Pöllä & John Cohen, and executive produced by Mikael Hed and David Maisel.

(Opening across the Philippines on May 11, 2016, “Angry Birds” is distributed by Columbia Pictures, local office of Sony Pictures Releasing International.)