ReZirb
Home Entertainment Ben Foster wanted to be experience what it was to be Lance...

The Program, director Stephen Frears’s latest film, will likely go down as the most in-depth, uncanny depiction of the rise and fall of Lance Armstrong to date. Credit goes to actor Ben Foster, who went to insane lengths to become Lance, taking on intense months of training, riding the most treacherous legs of the Tour de France while filming, dramatically fluctuating his weight by 30 pounds to portray every point of his career, from the top of the podium to the battle with cancer, and even going on his own regimen of performance-enhancing drugs “to more deeply understand what this world was about,” Foster says between screenings at the Zurich Film Festival. He did everything but speak with the film’s subject man-to-man. “In so many words, Lance Armstrong was not interested in talking with me. I couldn’t blame him at all. I wouldn’t have wanted to talk with me either.” 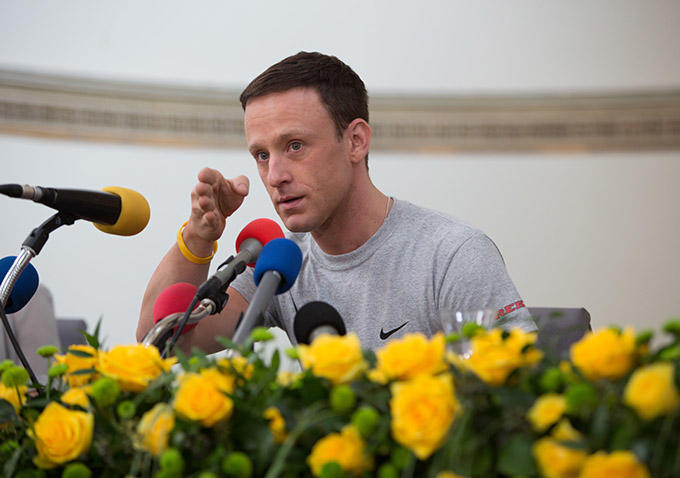 Did playing Lance Armstrong give you a newfound appreciation for cycling?

I appreciate the rigor it demands, but I have not been on a bicycle since we finished shooting because I’ve been pretty deeply traumatized. I hadn’t cycled before and only had a limited amount of time to train. Simply said it was an aggressive training process.

What drew you to the project?

The interest for me was working with Stephen Frears. He’s made so many kinds of movies. To my eyes I can’t find a signature style of his. Lance, on the other hand, is very recognizable. To get the opportunity to explore a subject that I knew very little about while working with a master filmmaker was a rare opportunity.

Do you think people in the States are still hurt by Armstrong’s story?

I do. From what I’ve heard and who I’ve talked to about it in North America, people get very emotional. They’re upset about the subject. In Europe it seems that they’ve been able to process what Lance did, while in the U.S., we haven’t done that yet. So far, I don’t think Lance Armstrong has apologized in a way that is palatable to us.

What are your own thoughts on how his scandal played out?

My job is all about defending the people that I play. I had to rationalize what he did. Early on Stephen would half joke that he was going to call the film “The Stupid American.” I thought that wasn’t too generous a title. We had different views and I hope that actually translates in the movie, that there are always two sides to the story. It’s a little more complicated than saying he’s a liar and a doper. He’s a man who raised a half billion dollars for cancer research. He won the Tour de France seven times in a row and he wasn’t the only one doping, he was just better at it. He did everything better. He moved the needle in all aspects of the sport while also doing a lot of good. His bullying was bullying people who were threatening his empire, and that empire was saving lives. I think calling him just a gangster is ignorant.

What did you read and watch of his appearances to prepare?

I watched everything. He’s so recognizable. Sitting that long on a bicycle, it’s going to even change the way that you walk. What made his story so accessible was the way that he communicated. His rage was always pretty close to the surface. I was interested in both the persona and the man behind the persona. The loneliness that must occur with people like that who are at the top of their field. To answer your question, the joy of the job is to ask questions and then consider them in both an emotional and physical way. You find that he had certain mantras, speaking about the will to survive, the way to better yourself. I imagine that he was a guy who looked around the room and thought, “Nobody is working as hard as I am. Nobody is as determined.”

Did you hear any stories that proved particularly insightful to who Lance Armstrong was as a person?

This isn’t a biofilm. You hear anecdotal stories. I would have liked to have partied with Lance. He sounds like he was a lot of fun. He went hard. I’d be talking out of turn if I talked about some of the stories, but I was most touched by the work and attention he did give the cancer community. He’d call up people that he didn’t know who were struggling with the disease and just talk to them for two hours. He would talk about the hope that you need to get better. His visits to the hospitals were very moving, my aunt started a foundation called Conquer Cancer”in Boston, Massachusetts. It’s a subject that’s important to a lot of people, and though right now he may be out of favor, it’s important to return to the fact that he did put in the time. He did raise that money. It wasn’t just a cancer shield. He tried to better the planet.

What kind of preparation did you do to re-create Armstrong’s appearance and cycling?

I was in very good hands. I rode with people who had rode with Lance in the peloton during the Tour de

France. They did their best to teach me how to look like he did. We had a computer program that had analyzed his position on the bike. Then we did the best to match my look and stats with his. I was also working with his nutritionist and his mechanic during his time on the Postal team. I worked with a wellness doctor who helped create a program of performance-enhancing drugs that I could do as safely as possible. I did that because I felt it was important for me to more deeply understand what this world was all about.

Cobbles are one of the more challenging aspects of the Tour. How did you face up with those?
We shot them in Belgium in the rain and mud. Insurance was not there on set that day, which was for the best because if you go down, you may break a knee, and then the film’s not happening. But keeping the handlebars loose in the hand, and keeping your balance is the trick behind those. I really loved riding the cobbles though. It’s brutal but fun.

The weight-changes were really impressive. How did you lose that much?

That was all me. That was a very grumpy me. I knew neither was going to last too long but I had about two weeks to go from one to the other. There wasn’t the money to support a more gentle change. To start, I was lifting a lot of weights, then I had two weeks to basically cannibalize my body. Shooting in sequence would have been ideal, but we didn’t have that luxury this go around. Weee! [Laughs.]

The first shot, of you at Alpe, d’Huez, is incredible. How did it feel to be there?

It was fucking scary. We are there shooting in the French Alps and I haven’t told anybody about this but I have terrible vertigo. Terrible vertigo. I’ve dealt with it. I’ve done bungee jumping. I’ve done wirework, but it’s a paralyzing fear. David Millar was one of our champions who made sure the details of the cycling were correct in the film. He was handling the opening shot. It was being filmed on a four-wheeler, with a steadicam on it. It was able to tilt and weave with us. They said, “Just head down the mountain.” Then they were asking me to speed up! I was riding the brakes for the first few minutes, but finally I had this moment where I started passing the camera. The competition part of your brain starts to take over and you want to tear the mountain apart. It was those moments where I started to understand the drug of the sport. The first bit of intensity in my face, though, was not, “I’m going to win.” It was, “I’m going to die.”

What do you think that you got out of this experience that will be useful in the rest of your career?

Very little scares me now. Once you ride down a mountain like that and don’t die, it’s hard to be scared anymore. 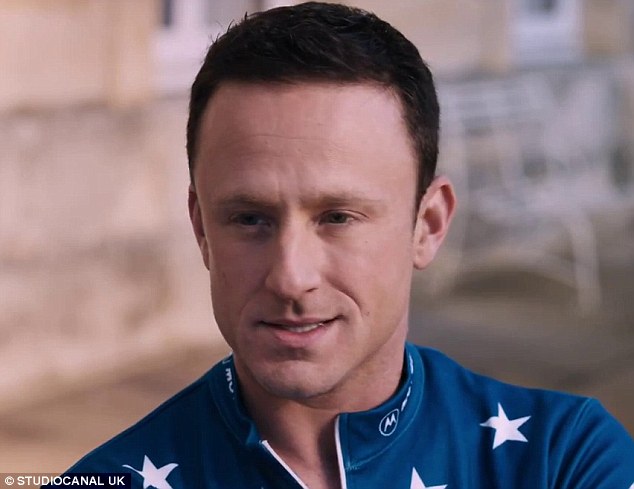 “THE PROGRAM” is released and distributed by CAPTIVE CINEMA. SHOWING MARCH 2. NATIONWIDE!