The heart of Disney-Pixar’s new family adventure “The Good Dinosaur” is the friendship that develops between Arlo and Spot—two characters who begin the story at odds. They don’t share a language and—at least at first—have little reason to come together at all. But thanks to a life-changing journey, Arlo and Spot find common ground and a relationship that will change them both forever.

Young actors Raymond Ochoa (Disney’s “Mars Needs Moms”) and Jack Bright (“Monsters University,” “Disney’s A Christmas Carol”) provide the voices of Arlo and Spot, respectively.
The last to hatch among his siblings, 11-year-old ARLO has yet to make his mark on his family’s farm. Though he is eager to help out with chores, this sheltered Apatosaurus just can’t seem to get past his fear of everything. “Arlo is young and vulnerable,” says character art director Matt Nolte. “He’s so unsure of himself and we wanted to capture that in his look. He’s smaller and thinner than his siblings.”

“We went through a lot of different voices,” Sohn says. “Arlo is at a crossroads—evolving from weak and innocent to a strong, more mature young adult. Everyone we heard sounded too young or too old. Raymond Ochoa has a quality to his voice that’s sincere and really appealing with that gravelly texture. He’s a great performer who was willing to be vulnerable for the more emotional scenes.” 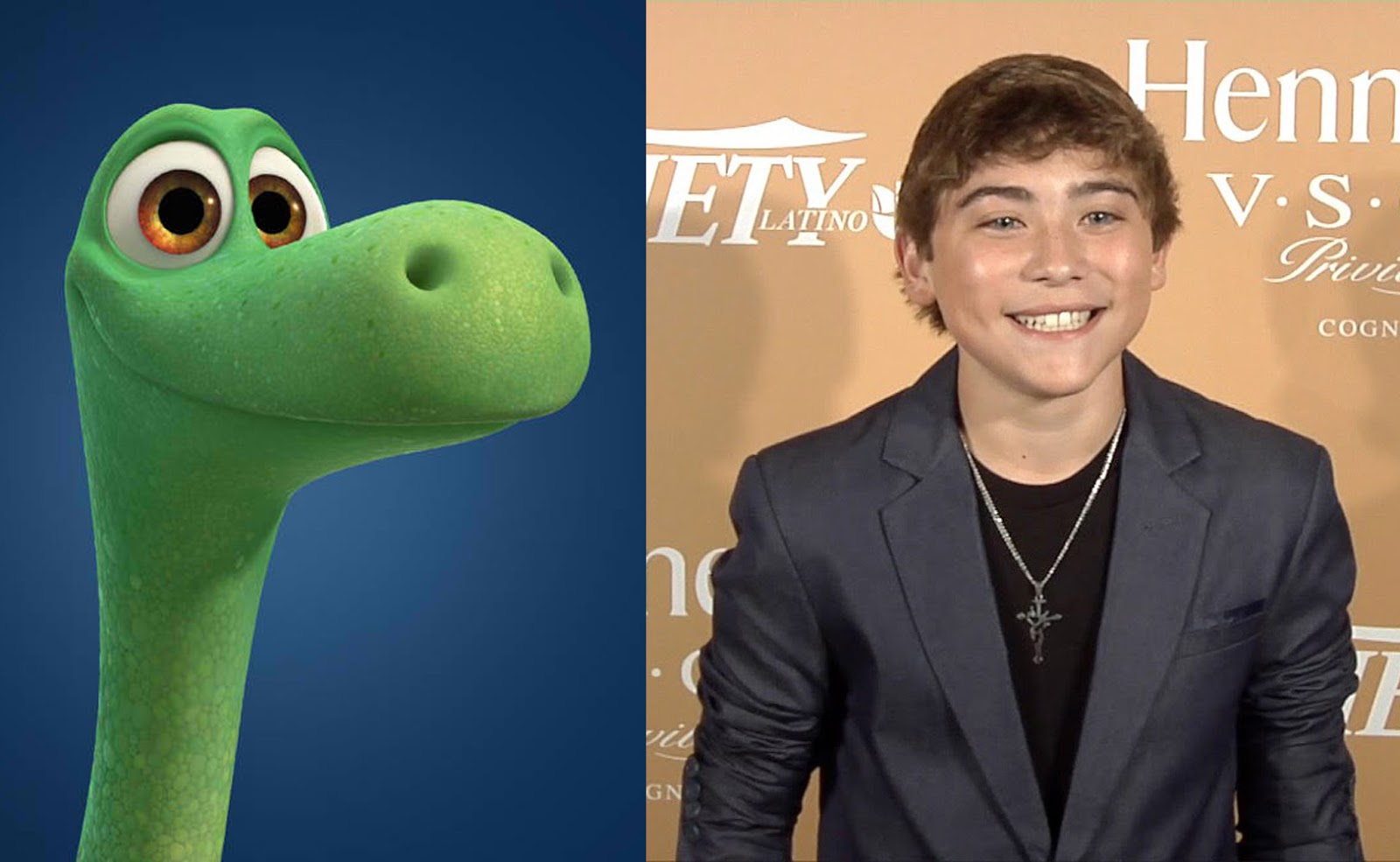 Ochoa, a lifelong fan of Pixar movies, liked taking the journey with Arlo. “To Arlo, the wilderness was a place to fear,” says Ochoa. “Bad things happen there. But the wilderness is actually where he transitions from being a little boy to becoming that mature, brave dinosaur he always wanted to be.”

SPOT is a wild, tough and tenacious human boy who has lived alone in the wilderness for much of his life. He speaks in only grunts and growls, but his strengths are clear: he’s fearless and confident. “This is very much a wilderness movie,” says screenwriter Meg LeFauve. “Spot is the wild animal who shows up to help the boy—in this case, Arlo—in need. Spot is of this place. He is a survivor.” 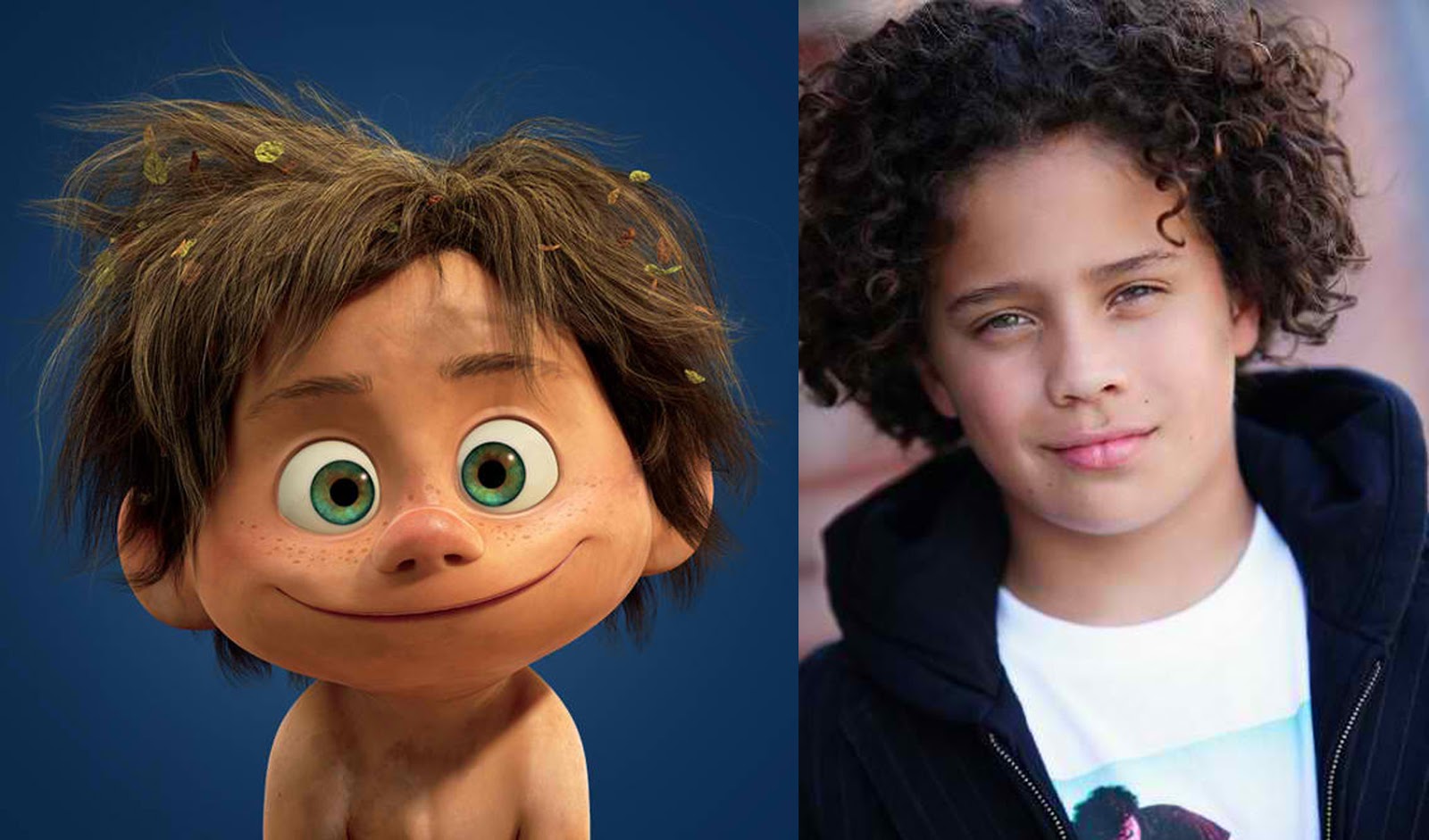 “It’s really fun to push Spot’s canine quality,” says Sohn. “We want it to be clear that he thinks and reacts like an animal in the beginning, but there’s a boy deep, deep down.”
But pairing this human with a dinosaur proved difficult. “Framing Arlo and all of the dinosaurs was a huge challenge due to their size,” says director of photography-camera Mahyar Abousaeedi. “But when something much smaller—like Spot—appeared in the same shot, that complicated our camera strategy. Composing Spot small in frame was important. We wanted to remind the audience that this is a boy-and-his-dog story—and that Spot is the dog. Composing Spot small in frame for most of the movie made for a more powerful connection when the pair begins to bond and we pushed into Spot for a close-up.”

A young actor named Jack Bright provides the voice of Spot. But since Spot doesn’t speak, the role called for equal parts creativity and enthusiasm. “Jack is incredible,” says Ream. “And Peter [Sohn] is such a natural with children—he can explain what he needs in a way that makes it easy to understand. He and Jack really made a really great team.”

New “Inside Out” Trailer Peeks Inside Parents’ Minds