Adapted from the novel by Dave Eggers, “A Hologram for the King,” starring Tom Hanks is set in a rising Saudi Arabian city, far from weary, recession-scarred America, a struggling businessman pursues a last-ditch attempt to stave off foreclosure, pay his daughter’s college tuition, and finally do something great. In A Hologram for the King, author Dave Eggers takes us around the world to show how one man fights to hold himself and his splintering family together in the face of the global economy’s gale-force winds. This taut, richly layered, and elegiac novel turned movie is a powerful evocation of our contemporary moment — and a moving story of how we got here.

This latest Tom Hanks starrer is directed by Tom Tykwer who has solidly established himself as a young Spielberg for this well-endowed type of international co-productionalism that basically milks state funds on a global scale. What Tykwer likes about “A Hologram for the King” Tykwer is its tacky surrealism, and he indulges in it. Tom Hanks is the fool in the dunes, but he gets a nice bath in the end, and even romance. When was the last time anyone thought of putting Hanks in a sex scene? That must have been Philadelphia, again. But then Saudi-Arabia is so strait-laced that even Everyman has an edge. 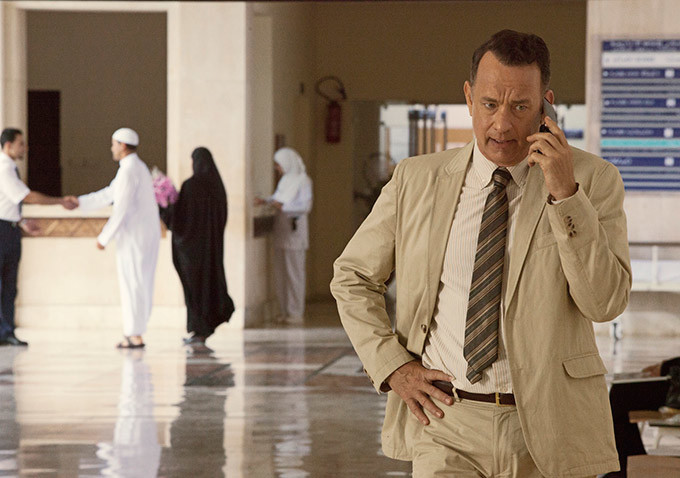 After Tom Hanks gave Dave Eggers’ National Book Award-nominated novel A Hologram for the King a rave review on his Twitter feed in 2012, only one issue remained unresolved for the two-time Oscar-winning actor. “I was already a big fan of Dave Eggers’ work, having read a bunch of his stuff including things he did with McSweeney’s literary review,” Hanks says. “Then I read A Hologram for the King in one sitting and my only question when I finished it was whether or not he wanted a movie made out of his book.”

German filmmaker Tom Tykwer, who co-directed Hanks in the 2012 sci-fi epic “Cloud Atlas,” felt just as strongly about the source material. “A Hologram for the King hit a very particular nerve in me,” Tykwer recalls. “It was the most contemporary novel I’d read in a very long time so I felt like it couldn’t wait: this story had to be made into a movie. It’s very much about now, yet it still it has the sense of a classic novel in that it’s a book for all times. I found that to be a brilliant mix so I turned into this very pushy machine trying to put the movie together as fast as I could.”

Tykwer, who had worked with author Eggers previously on a miniseries adaptation of the San Francisco-based author’s novel “What Is the What: The Autobiography of Valentino Achak Deng,” arranged a meeting with Hanks and Eggers at a Los Angeles hotel. After pitching his ideas for the book’s cinematic adaptation, Tykwer and Eggers came to a very un-Hollywood-like agreement. “Dave and I trust each other,” the director explains. “I love that he offered to get rid of all the contract stuff and just write on some piece of paper ‘I promise not to be an asshole’ and then we would both sign it. We’re very much on the same page when it comes to artistic exchange. Dave understands that once you let somebody take over your vision, you have to keep some distance.”

Tykwer was equally excited about partnering once again with Hanks. “Working with Tom is liberating for a filmmaker because he’s so open-minded to every moment and every situation,” Tykwer says. “He’s like a superintelligent child who comes into a room and says, ‘Okay, what are our toys?’ And then, ‘Let’s explore what we can do with them!’ That’s super inspiring because when you come up with a new idea, he picks it up really greedily and does something with it in a wonderfully playful way.”

“A Hologram for the King” opens June 1 in cinemas to be released by OctoArts Films International.