From David Kanter, executive producer of “The Revenant” comes a non-stop blistering action thriller “Bastille Day” starring Idris Elba and Richard Madden set in the French capital, Paris, is a story of an unlikely pair – a reckless CIA agent and a brilliant pickpocket – who must work together to uncover and take down a conspiracy.

“Bastille Day” tracks Michael Mason (Richard Madden, “Game of Thrones”), an American pickpocket living in Paris who finds himself in the hands of the CIA when he steals a bag that contains more than just a wallet. Sean Briar (Idris Elba, “Pacific Rim”), is a field agent on the case, who soon realizes that Michael is just a pawn in a much bigger game and is also his best asset to uncover a large-scale criminal conspiracy.

Going against commands, Briar recruits Michael to use his expert skills to help quickly track down the source of the corruption. As a 24-hour thrill ride ensues, the unlikely duo discovers they are both targets and must rely upon each other in order to take down a common enemy. 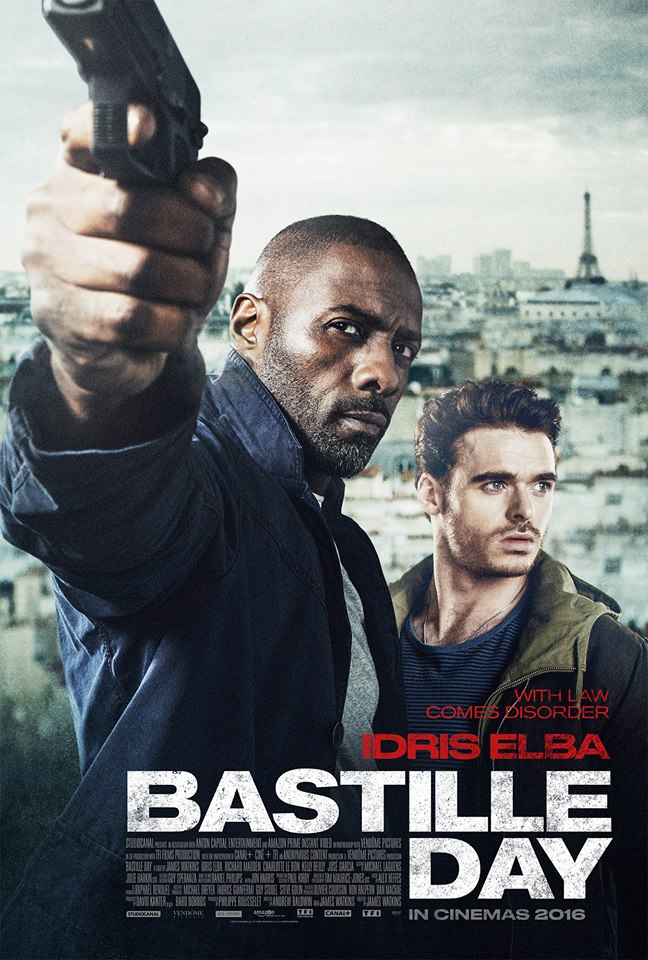 Directed by James Watkins and written by Andrew Baldwin and (James Watkins), the original idea for “Bastille Day” was when Baldwin wanted to create a movie that combined the taut action of the ‘Bourne’ movies with the character-rich experiences of watching movies like ‘Frantic’ and even ‘The French Connection.”

“Briar’s character – uncompromising, brutal, reckless – had shades of Popeye Doyle, Dirty Harry or Walker from John Boorman’s Point Blank. The notion of Idris Elba playing this role was irresistible to me. His combustible relationship with the streetwise Michael struck me immediately as the beating heart of the film and I liked the opportunities this relationship gave for lighter moments. It reminded me of the gruff, salty humour of early Don Siegel/Clint Eastwood collaborations or classics like Midnight Run and 48 Hours where the tone shift gears from gritty action to more playful moments whilst never breaking character,” recalls director Watkins.

Kanter also points out that it’s the way the characters have been developed that makes “Bastiller Day” special. “The characters are not conventional heroes; rather, they are all flawed and forced by circumstance to discover who they really are. One key to the success of the film is that they are believable and realistic. “It feels like a movie from the 1970s, where the characters are all carrying something heavy in their psyches. They are thrown together by fate and come to realize that the bombing isn’t what it appears to be, so they are forced to depend on each other.”

“I wanted to make a big Friday night out film” exclaims James Watkins. The director’s ambitions for “Bastille Day” were one of the reasons the producers approached him. This was to marry big budget commercial thrills with kinetic, in-your-face shooting style with handheld cameras up close and personal with the actors, to get right in the middle of the action. “We wanted to be close enough to feel them, to feel their breathing, to be right in their eyes. A lot of the actions shots are from a subjective point of view, so as a viewer you feel completely in the moment. I’m not interested in CGI which creates scenes that defeat the laws of physics! So, however large the story is, everything should always have an emotional sense of truth. Ultimately, you go to the movies to see people and so the closer you are to those people, the more you’ll enjoy the experience,” Watkins concludes on shooting the movie.

Baddies Have Fun as “Suicide Squad” Rolls Out New Trailer