Christopher Nolan has taken audiences from the streets of Gotham City, to the infinite world of dreams, to the farthest reaches of space. Now, for the first time, the innovative director/writer/producer has turned his camera to a real-life event, one that has resonated with him throughout his life: the miracle of Dunkirk.

Warner Bros. Pictures’ Dunkirk is based on the evacuation that—although it took place in the early months of World War II—had a direct impact on the outcome of the war. Rather than make a battlefield drama, however, Nolan’s objective was to turn this historical moment into immediate, immersive cinema: a propulsive, ticking-clock, epic action thriller in which the stakes couldn’t be higher.

He affirms, “What happened at Dunkirk is one of the greatest stories in human history, the ultimate life-or-death race against time. It was an extraordinarily suspenseful situation; that’s the reality. Our aim with this movie was to throw the audience into that with an absolute respect for history, but also with a degree of intensity and, of course, a sense of entertainment, too.”

The remarkable true story that inspired the fictional film is one that has fascinated Nolan for many years “and one I’ve been wanting to tell for quite some time,” he says. “Like most British people, I was raised on the mythical story of the evacuation of Dunkirk, and the victory that was snatched from the jaws of defeat,” he relates. “It’s a massive part of our culture. It’s in our bones.”

The story began in late May 1940, when the British Expeditionary Force, along with French, Belgian and Canadian troops were forced back to the beaches of Dunkirk. Though home was just 26 miles away, there was no easy way to reach it. The shallow-drafted beach, with its 21-foot tide, prohibited the large British naval ships from rescuing the men. But there was hope: a call had gone out for small boats to aid the effort and a flotilla of non-military “little ships” sailed out from the southern coast of England to bring the men home, codenamed Operation Dynamo. 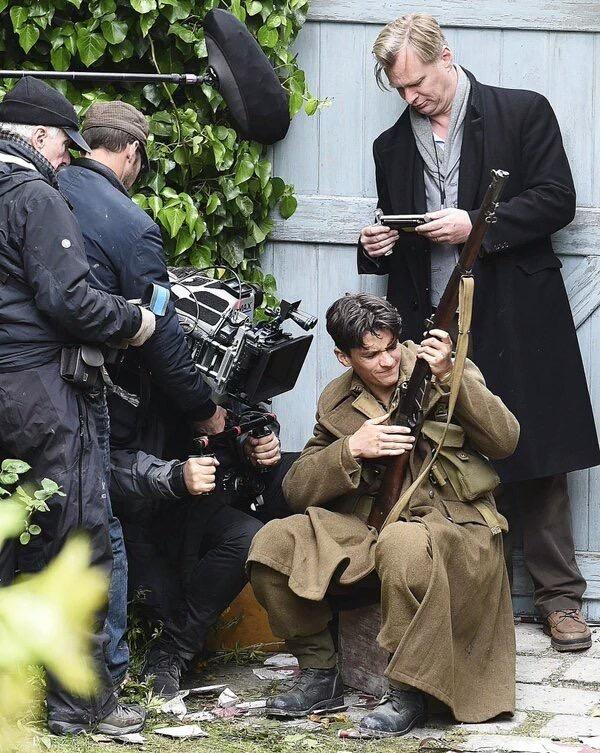 The film’s historical consultant, Joshua Levine, author of the book Forgotten Voices of Dunkirk, emphasizes that the 1940 evacuation is far more than just a British story. “It was a massive event that still has international significance. Everything that’s celebrated about World War II—in Britain, in the United States, and all around the world—would not have happened without the Dunkirk evacuation taking place. It was unbelievably important. If the British army had been killed or taken prisoner, Britain would almost certainly have surrendered, and we’d likely be living in a very different world today. To me, Dunkirk is about the preservation of freedom. Once those ships were underway, the world still had a chance.”

In fact, the rescue of their stranded army against seemingly impossible odds gave rise to a term that is a permanent part of the British cultural lexicon: “the Dunkirk spirit.” Producer Emma Thomas defines, “It’s something English people pride themselves on: that sort of plucky grit and determination in the face of adversity.”

Nolan’s primary goal was to put the audience directly onto the beach, onboard the boat traversing the Channel, and in the cockpit of the Spitfires. He had been the first to use IMAX cameras in a major motion picture, for The Dark Knight, and has employed IMAX cameras on all of his subsequent films. But for Dunkirk, he expanded the use of large format—shooting the entire film with a combination of IMAX and 65mm film, something, he confirms, “I’ve never done before, but Dunkirk is a huge story and it demanded an enormous canvas.

“The reason we were shooting on IMAX film,” the director continues, “is that the immersive quality of the image is second to none. When you sit in the movie theatre, the screen disappears and you really get a very tactile sense of the imagery. That lends itself to incredible panoramas and large-scale action. But we’ve also found over the years that if you use it for more intimate situations, it creates an immediacy that’s very engaging. So our feeling was, if we could find a way to do it physically, the payoff would be well worth it.”

Opening across the Philippines on July 20, Dunkirk is distributed by Warner Bros. Pictures, a Warner Bros. Entertainment Company.