ReZirb
Home Event Could Ozamiz City Be the Next Backpacker’s Dream? (part 1)

I have equal penchant for blogging and travelling. And I was privileged, as an ex-OFW, to have seen exotic destination in Mid-east & Asia and tell tales about them. But there’s this hole still waiting to be filled, and itching – begging to be scratched. I guess, it is thru trailing far-flung corners of my own land would I be complete – the countrysides I wishes to go as a kid.

Nurtured from the Metro, the farthest local destination I’ve been so far is Palawan and Mindoro. So saved by the kind invite of the  competent Media Group The Big Difference Communications (TBDC), I was summoned to it’s unprecedented Media Familiarization Tour Program officially launched last October 28-31, in Ozamiz City, Province of Misamis Occidental, Northern Mindanao.

The invite came when I needed breathing of fresh air the most; when I swear to escape Manila’s kilometric traffic jams & chaos of rushing people. I packed my bags promptly and braced myself for a 6:45 am domestic flight . Soon, I found myself saying “Good Morning” to the clouds 35,000 feet above the ground.

Mabuhay!… Mindanao at Last.
Barely 5 years since I last rode a plane so the engine take-offs and creepy turbulence does chill my spine. It was the longest 1 hour & 15 mins sky-ride of my life. Dang! I was a picture of a newbie, but I had to stay sane and sound. I waited for this travel of a lifetime.

Approaching the gateway, the stunning sights of majestic trees from window pane is a source of respite. Their endless formation is a strong testament of how rich the soil and agriculture of the island. With gusto’, we were hailed with a Lei and amusing Tribal performances by beautiful Misses of Ozamiz enough to awaken a semi-jet-lagged soul. I was sleepless, but ready. I sensed this City trip is going to be lively and true to my adjective – AWESOME!

AND SO IT WAS.

This man of the hour, whose hard-earned name in local culinary dishes and delicacies does make our Ozamiz City visit even more noteworthy. “Daghang Salamat Chef & to your amazing Team!”

We were fed sumptuously by our gastronomic sponsor Chef Johann Dagandara of the highly popular Johann’s Cuisine. I will never forget the hospitality of this man who pamper our bellies with his notorious lechon and crispy pata specialties like a Mang Inasal crew serving unli-rice. The meal courses in abundance bloated our tummies in delight. The heck to blood pressure, we craved for more!. Well, who hasn’t?, we were fueled as someone enjoying his last supper. But nah, this is just commencing our escapade. And the day ahead of us is bright and long. Back to the food, the dishes catered to our front looks vaguely familiar, but they tastes SUPER!

“the spectacular panoramic view is great for corporate retreats & best-shared w/ someone you love:)

UP FOR A THRILL,

Hoyohoy highland‘s mystical wonder is a favored summer getaway for nature seekers. The Local Govt Unit allies with DOT & #TBDC for this tourism-boost agenda aim to make this once forgotten attraction bloom to it’s finest.

This hill in Tangub is home to Asia’s highest/longest Zip-line (1,500m when reaching the far-end & 1,200 upon going back). Be warned: You’ll be lost in sight, but be “remembered” by a wacky photo. Cost: not bad for P600. Tormented with acrophobia, I declined the challenge. I realized, I wasn’t born for this. But it’s a joy to boost my colleague’s uncommon valor and capture their ear-piercing screams before their presence vanish in a snap.

“Go Guys! you can do it! “. our new folks from Grid.ph & Explorer Magazine gamely thumbs up w/ me prior to their “verdict”.

On a lighter side, the quaint stone chapel atop the hill will lend you a moment of serenity & meditation. The portal that made up of centuries-old rocks is said to be engineered by a local congressman’s bare hands. Nothing beats the blissful air & chirping of wild birds while communing w/ God in prayer. Opens daily from 8am-8pm @P30 fee.

FROM DUSK, TILL DAWN…

Weathered by time, it’s historical significance was preserved and the former glory remain timeless. In our ocular, the house keeper in her twilight years proudly whisper to us a trivia: “Dr. Jose Rizal used to unwind here on his heydays. That is the same wooden couch he rests on when he read books and drink wine with the clan”. There is something supernatural in the house and I should mention creepy. Thus, a must-see for backpackers with 3rd eye. Whew!

Motorbikes  are quite rampant here, but not helmet-wearing. I saw a number of zooming young women who outsmart their male counterparts. Had since  no jeepneys or taxi’s available, tricycles, or their 2 wheel improvised motor called ‘habal-habal’ replaces a 4 wheel in mountainous trip. The rate is standard. but theirs are made for carrying more. The roads are well-paved, and most importantly, not congested. The drivers respectful of new faces. It’s as easy as ABC to get yourself acquainted around with notable landmarks.  (You won’t get lost). 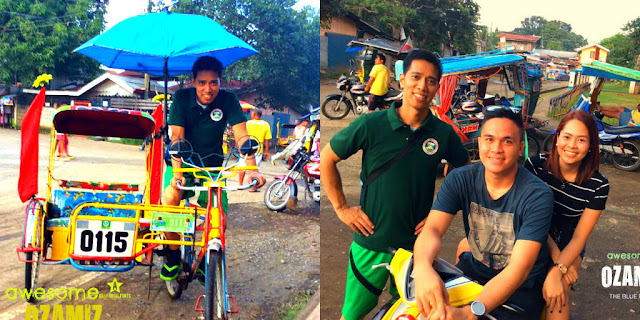 Charmed by the  local’s warmth

I tested a pedicab or “Sikad”  I first thought was  easy to pilot. Boy, It was  heavy. (what more with butts inside?) My respect here went to the diligent drivers and the same goes for the residents.  Ozamiznons mirrors the Thais of Bangkok. They  are cordial, interesting people who love to smile.  Plus, the millennials value a good education, so expect them to be well-bred. The ones I’ve met also frequents the Capital, so they could speak Tagalog with fluency.  To my new friends Chris & Jean,  “Nalipay ko nakaila ko nimo.” (Pleased to meet u – Did I say it right?).

Despite of the grim pictures that once plague the region, it rose from it’s battles and pledges to stay on; And just many of us in the media who were at first cynical to set our foot there, optimistic spirits remain and inspired us to discover the city’s mystique and treasures. Our naked eyes has seen a different world, more than our news-polluted ears have heard. The Ozamiz City we unearth is changing – and moving forward, but just like a tree planted by the water, there are histrionic chapters still in the making.