Pratt was drawn to “The Magnificent Seven” because the chance to play real-life Cowboys and Indians was irresistible. “I’d put it out there that I wanted to do a Western, and when I was able to read the story and see the vision for the movie, I got really excited,” says Pratt. “The reason I was so excited to do a Western was to get the chance to do the horse and gun training. Getting to hang out with our horse wrangler, and all of the real cowboys was an absolute treat. Getting to play with real Colt Peacemakers, .45 long Colts – shooting them, spinning them – was so much fun. We were a bunch of big kids out there.” 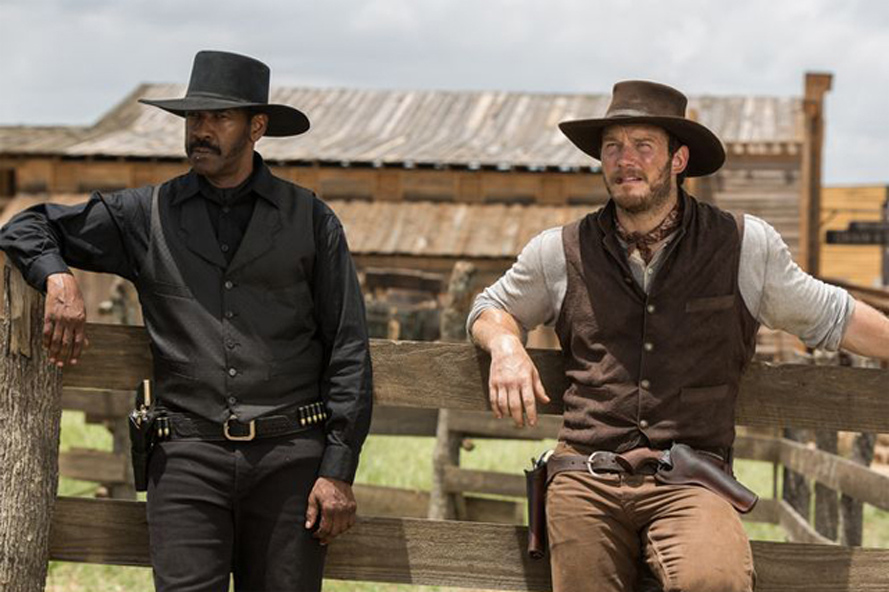 Josh Faraday is a gambler with a wise mouth but a cool hand with the pistol. “Faraday is a bit of a fox, a trickster,” says the Pratt. “He’s lighthearted, a gambler, a drinker, a cigar smoker, he loves the ladies – but he’s deadly. He keeps his head cool, even in the most dangerous situations. He’s tranquillo – he moves slow, slow is smooth, and smooth is fast. He is efficient in killing because he keeps a cool head.”

“The relationship between Chisolm and Faraday, as well as the other characters, is what really drives this movie,” Pratt continues. “These are men who, through the course of their lives, have dealt with being killers in various ways. Faraday has killed a lot of men, but he’s never felt bad about it. He assumed that he was bad. And that’s part of the reason why he wants to help the people of this town – if he can do that, maybe he was wrong, maybe there’s some good in him, maybe he’s not so bad after all. It’s something he’s never experienced, a positive feeling for helping other people, seeing something bigger than himself and being willing to fight for it.”

“Chris Pratt is the nicest man in the world. Who you think you see is exactly who he is,” says Fuqua. “All-American, funny, always charming, always positive, always there to help people.”

In the original classic Magnificent Seven, Steve McQueen played off of Yul Brynner – and while Faraday is a different role, Fuqua was looking for a similar charming dynamic. “He has the charisma and the charm of a Steve McQueen – we asked, who’s cool? Who has the charm? Who is a movie star? And that dude just has it.”

In Fuqua’s vision, the film was shot in a classic way – avoiding visual effects when possible, and choosing instead to work with some of the world’s greatest stuntmen to perform practical stunts, capturing the action in-camera. Chris Pratt was impressed: “I’ve done a lot of big movies similar in scale and scope with giant sets, but most of those – `Guardians of the Galaxy,’ `Jurassic World’ – relied heavily on visual effects,” he says. “On this movie, we did practical stunts. Every horse fall you see is a stuntman falling off a horse traveling at a fast speed, and there are hundreds of them.”