In the real-time, Columbia Pictures’ high-stakes thriller “Money Monster,” George Clooney and Julia Roberts star as financial TV host Lee Gates and his producer Patty, who are put in an extreme situation when an irate investor who has lost everything (Jack O’Connell) forcefully takes over their studio.

During a tense standoff broadcast to millions on live TV, Lee and Patty must work furiously against the clock to unravel the mystery behind a conspiracy at the heart of today’s fast-paced, high-tech global markets.

“I love this movie because it has two things that sometimes people think are opposites,” says Jodie Foster, who directs the thriller “Money Monster.” “One is that it’s a mainstream thriller that’s exciting, fast-paced, smart, and yet, still has a real accessibility. The flip side, which is the most important reason to go to the movies, is that you’re moved by a real story. It’s incredibly relevant.”
“To me, the most exciting part of the story, in addition to the cops, helicopters, guns, bombs, and fast-paced excitement,” Foster continues, “is how this man, Lee Gates, played by George Clooney, starts off one way – a shallow, smug, empty guy, who’s successful at his work but a failure in everyone’s eyes, including his own – but has a terrible moment that forces him, with Julia’s help, to rise to the occasion, find his humanity, grow up, evolve, and change.”

“Jodie never lets up on the pressure cooker,” says producer Daniel Dubiecki, who produces the film with his partner, Lara Alameddine, and with Clooney and his partner, Grant Heslov. “This whole film takes place in real time as this event is broadcast on live television – it’s very tense.” 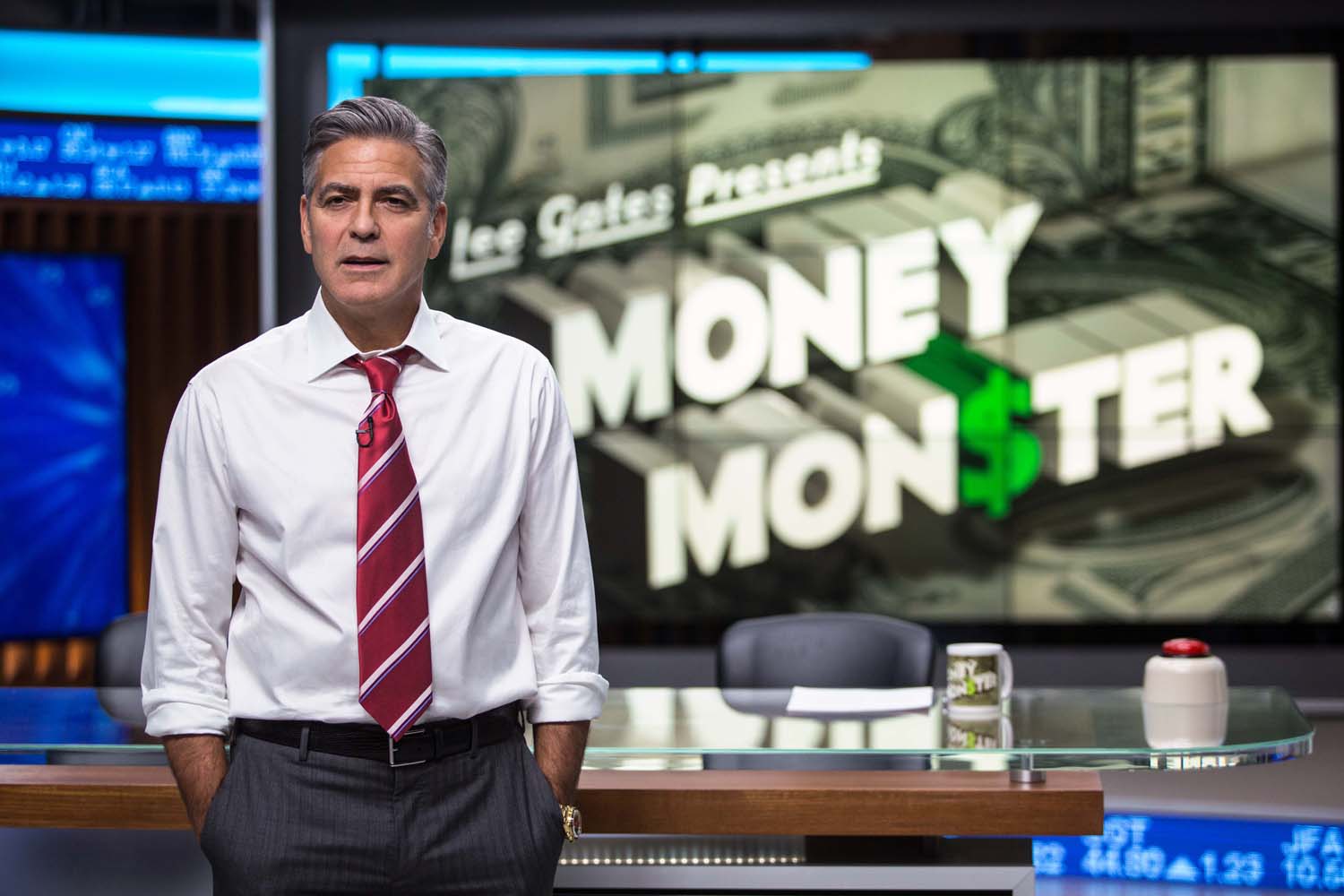 Clooney stars as Lee Gates, a celebrated stock picker and famed host of the titular financial television show, who darts and dances around his set, shouting investment advice and punctuating market talk with silly props and sound effects. “‘Money Monster,’ the show, is pretty ridiculous,” says Foster. “It’s a financial news show, but there’s lots of props, old movie clips, bells, whistles, and whoopee cushions that Lee Gates has come up with in order to explain the financial market. He sings and dances with beautiful girls, wears different hats – all so he can dispense stock trading tips – but it has left him with a buried sense of self-loathing. The film presents him with an impossibly unexpected chance at redemption.”

Re-teaming with George Clooney is Julia Roberts, who plays Patty Fenn, the unflappable, steadfast and longtime producer of “Money Monster.” “Patty Fenn is the uber-producer. She can multi-task like nobody’s business – she is amazing,” says Foster. “She controls the strings of this show and speaks in Lee Gates’ ear to tell him what his next move is. Lee Gates can be lazy. He doesn’t learn his lines. He says whatever the heck he wants to say, and she’s there to make sure that the show runs smoothly. She knows how to handle this loose cannon.” 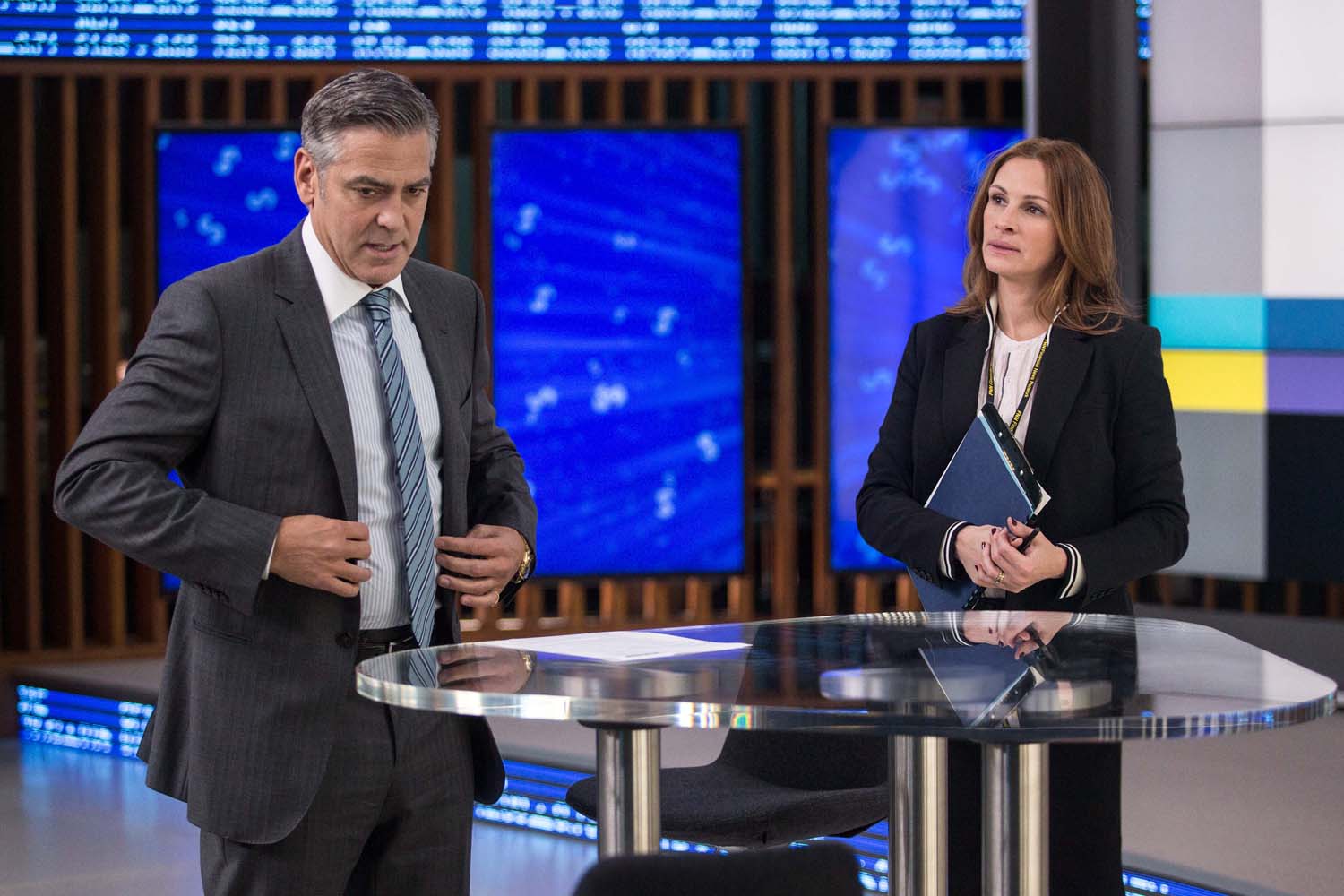 When one of Gates’ heavily hyped stock predictions, Ibis Clear Capital, mysteriously plummets, his blatant complacency is placed front and center for the world to see as Kyle Budwell (O’Connell), a distraught investor, hijacks a live “Money Monster” broadcast to hold Gates’ and Fenn’s feet to the fire.

In taking over Gates’ show, he sets in motion a crisis that unfolds in real time, on live television. “That was fun for us,” says producer Grant Heslov. “We’ve become almost numb to the stuff we see on TV and the internet, and by having this take place on live TV was a fun way to comment on that.”

The Revenant Wins On Its Opening Friday At The Box-Office