In “Mockingjay – Part 2,” Peeta Mellark – the former victor who was to marry Katniss in a Capitol spectacle – is still in a haunting, dangerous fugue state after being brainwashed by President Snow during his captivity. Though his body has been freed, his mind struggles against nightmarish, instilled thoughts to kill Katniss, the very same person he once most trusted in the world.

Hutcherson sums up where the film finds Peeta: “Peeta’s going through a kind of rehabilitation process, trying to get back to his old self. He’s being held in District 13, but he’s still violently psychotic and his recovery is clearly going to be a very long, hard road. He has moments of clarity but he kind of goes in and out. With all these memories that were implanted in his mind by the Capitol, he has to constantly try to decipher what is real and what has been fed to him – and he has to rely on his peers to help him find that truth.”

For Hutcherson, the film required a 180 from how he normally approaches the character. “Peeta’s always been known as being the down-to-earth, grounded, honest guy. But now he’s out of his mind, I had to turn that inside out,” he says. “It shows a lot about the real feelings that Katniss has for Peeta that she still fights for him and believes in him even in this state.”

When Peeta is sent by President Coin to join Squad 451 – consisting of Katniss, Gale, Finnick, Boggs, Cressida, Messalla, Castor and Pollux – it endangers everyone, but helps Katniss break through to him. “Really, he should not be in this environment,” Hutcherson admits. “It has tons of triggers that could cause him to explode and, and lose control again, which actually happens multiple times.” 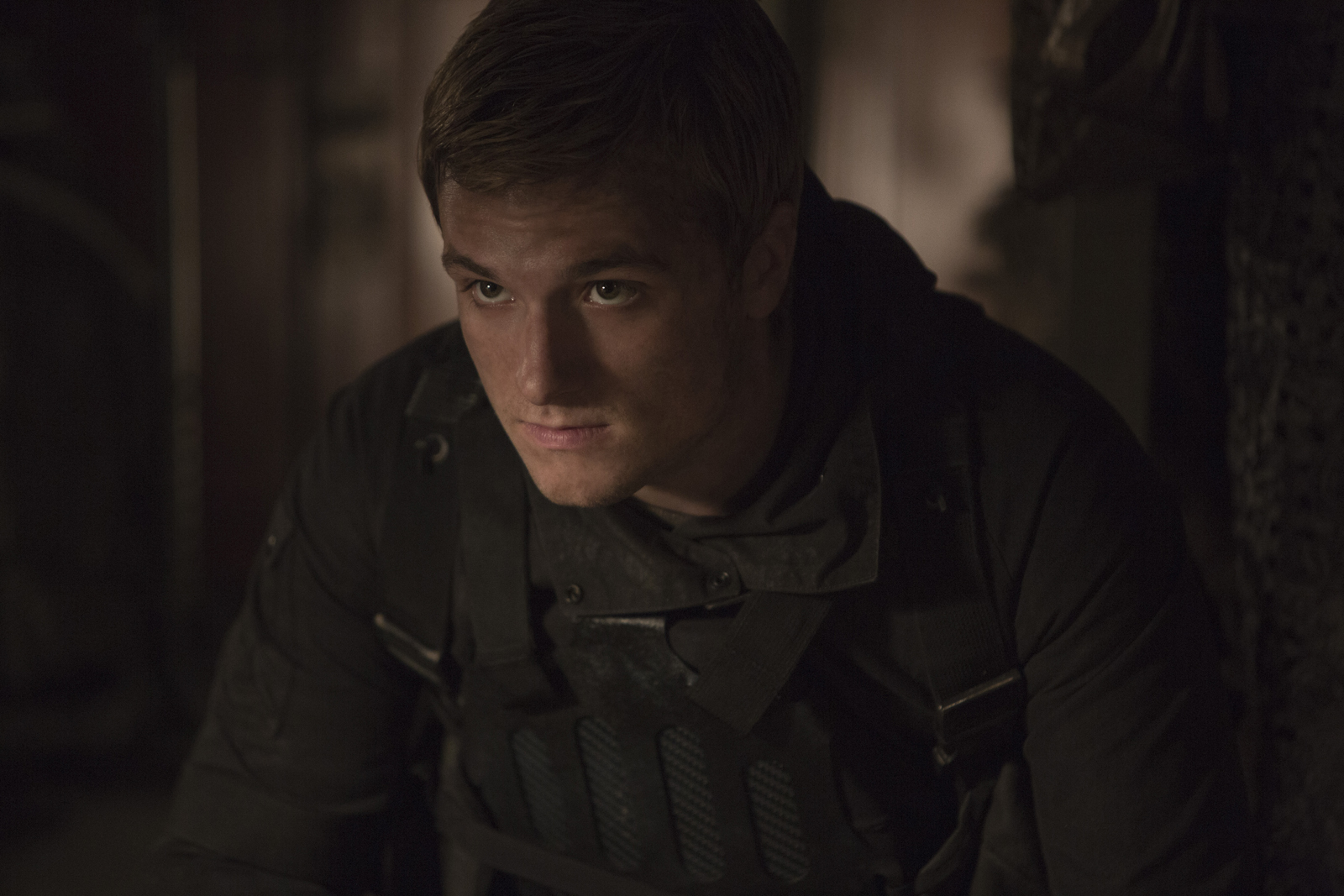 Throughout, Peeta’s true feelings for Katniss keep surfacing in ways that keep him bonded to her at an unspoken level. For Hutcherson finding those breakthrough moments with Jennifer Lawrence after the three previous films came organically. “Jennifer has this quiet strength about her,” he says. “A lot of people might have tried to play up the rebellious side of Katniss, but Jennifer saw from the start that’s not who Katniss is. Jen has played Katniss’ reluctance and groundedness so well, it always feels very real to me. It’s one of the reasons why I think Peeta connects with her and why so many people have connected with The Hunger Games.”

As for how Peeta has evolved since he first left to represent District 12 in The Hunger Games, Hutcherson concludes, “Peeta always had a very realistic view of what was happening around him. He’s more haunted now from having experienced The Hunger Games first-hand, and from witnessing the destruction that Snow’s dictatorship can cause. But deep within, his mentality has always been you have to not let yourself be a piece in the game; you have to try to be yourself even as you fight to survive. That’s still what he would say to this day.”

Like Jennifer Lawrence, Hutcherson says he will miss his character, but he will take a lot from the long and rich experience of playing Peeta. “I definitely will take away great friendships and memories from The Hunger Games,” he says. “I also hope I take away some of Peeta’s values. When you do a project like this, people can get certain ideas about who you should be – and Peeta is a reminder that it’s best to kind of break those expectations and simply be true to yourself.”

James Franco Stars In Riotous Comedy “Why Him?”