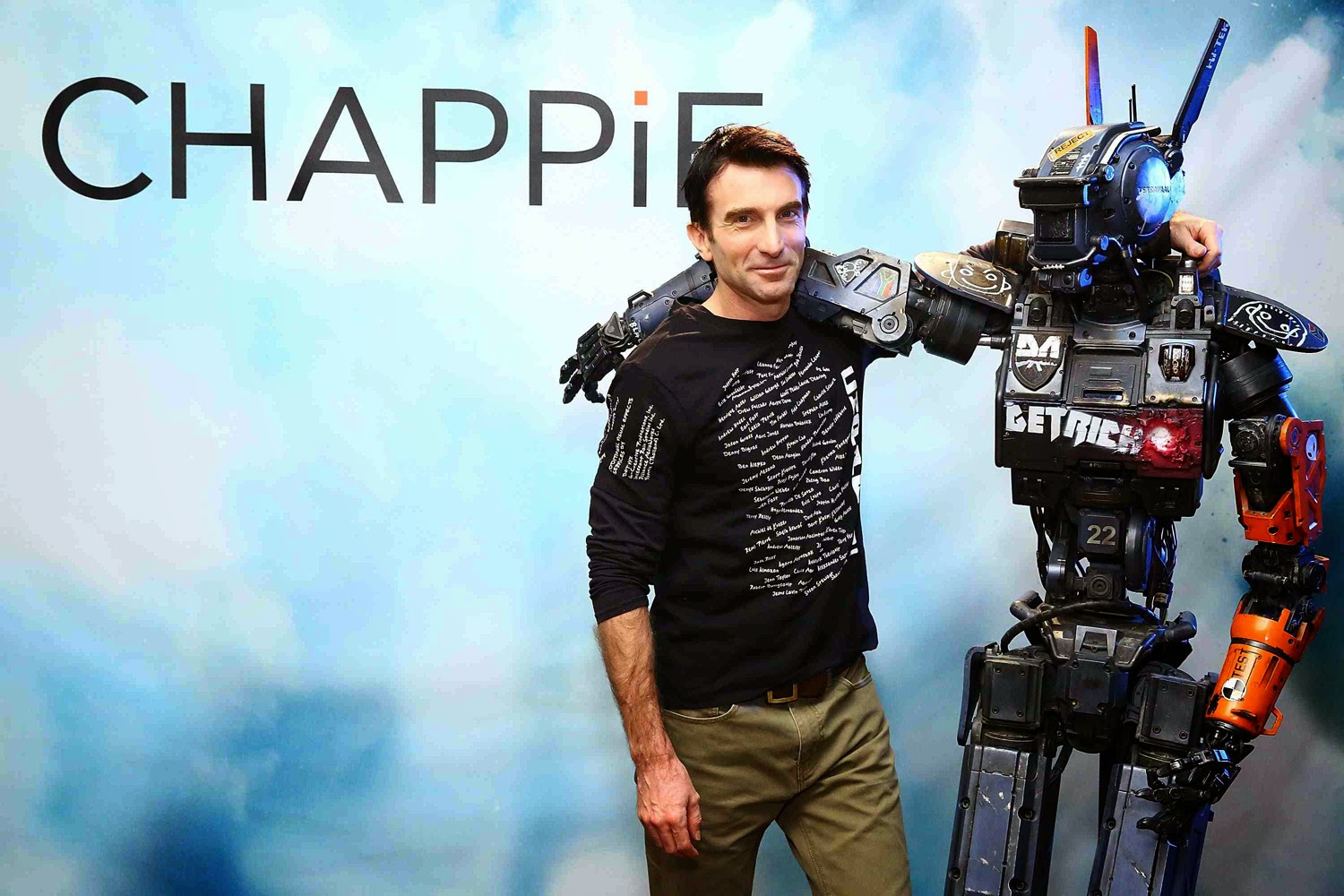 “Is it because they can paint, or like a certain kind of music?,” Copley continues. “For humans, it would probably be if the machine had feelings – if we were connecting with a machine in the way that we connect with people. I think that’s what would make most people call a machine ‘alive’ – if it experiences emotions in the same way as us.”

In the film, crime is patrolled by an oppressive mechanized police force in the future. But now, the people are fighting back. When one police droid, Chappie, is stolen and given new programming, he becomes the first robot with the ability to think and feel for himself. As powerful, destructive forces start to see Chappie as a danger to mankind and order, they will stop at nothing to maintain the status quo and ensure that Chappie is the last of his kind.

Chappie is a police droid called Scout who is given consciousness by artificial intelligence. Copley performed the role on camera, performing in each scene opposite the other characters. Not only did this allow Chappie to feel like a very real and authentic character, but it helped the other actors to bring their characters out to the fullest. Later, in post-production, director Neill Blomkamp worked with the wizards at the VFX facility Image Engine to bring Chappie to fruition, painting the robot Chappie over Copley’s performance and creating the robot from Copley’s movements. The way that Copley emoted in his scenes informed everything about the robot – from the way Chappie moves, or sits, or holds his head… even Chappie’s ears.

In many films with CG characters, the filmmakers sometimes choose to film the scene with only the live-action actors as they perform against only a single point. That was never going to happen on Chappie. “There was never going to be a world where we filmed with a tennis ball on the end of a C stand,” says producer Simon Kinberg. “It was always going to be real and in the moment.”

“Sharlto’s performance is the thing that brings Chappie to life,” Kinberg continues. “He is so human and sad, touching and vulnerable. You feel it in his body language and voice – everything takes its cue from Sharl. The way the robot’s eyes move, the way its ears move, and certainly the way its body moves – all of that is dictated by Sharlto’s performance.”

Kinberg also says that having Copley performing the scenes helped all of the actors. “For the other actors, when you’re interacting with a real person, it all feels more real, human, textured and grounded,” he explains. Copley says that in some ways, the role was like any other. “Neill said, ‘You just play the role, and we put the robot on top,’” the actor explains. “The film should work with me in the grey suit – you should still be able to watch the film and be moved by it.”

Copley notes that Chappie is unlike any role he’s ever played before. “It was quite interesting for me, movement wise,” he says. “I had to be very aware of every mannerism. The essence of Chappie is in how he moves and how he reacts – and not necessarily what he’s saying.”

Even though he would never be seen on film, Copley wore two pieces of costume attire to help get the character right. “I wore a chest plate, to keep my back and chest proportions the same as Chappie’s,” he notes. This allowed Copley to know what spaces he could fit in and how the robot would sit or stand in certain positions. In this way, when an actor grabs Chappie’s shoulder or chest, the actor’s hands are in the right place when Copley is replaced by Chappie in the computer.

But the chest plate wasn’t all. “I wore a grey suit with tracking markers for the animators. It was skin tight, and skin tight clothing is not gangster,” he says. Needing something that would help him feel like a gangster, Copley added a pair of shorts and a belt. “During the gangster scenes I would loosen my belt and drop the shorts half way down my backside. That was my trick, to transform from grey suit man into gangster Chappie. It helped create the right kind of gangster movements.”

Copley says that the unconventional style of shooting and animating the film was a great benefit. “Animators will tell you there’s a huge difference between animating something from scratch and working with what an actor has already done,” he says. “It’s a lot easier for them to create a moving character if the base performance is already there. Obviously, it’s also a lot better for the other actors to have a grey suit actor actually on set that they can interact with.”

“Chappie’s animators are incredible,” concludes Copley. “They’ve managed to capture and translate every nuance of my performance. In addition, they had the challenge of trying to translate my facial movements onto Chappie, who has almost no face. They did an incredible job. I feel like they elevated what I gave them together we created some kind of unique being. “

Opening across the Philippines on Thursday, March 05 in IMAX and 2D cinemas, “Chappie” is distributed by Columbia Pictures, local office of Sony Pictures Releasing International.