In the new family film, “Home,” from DreamWorks Animation, Steve Martin is the voice of Captain Smek, the vain and weak leader of an alien race called Boov. They land on Earth and take over the planet.

One little Boov called Oh, voiced by Jim Parsons, is in deep trouble with Captain Smek and becomes a fugitive. He has made an apparently unforgivable mistake and incurred the wrath of his leader, who is threatening to erase him.

Luckily, the little purple Boov meets Tip (Rihanna), a plucky young girl, and the last person on Earth. The two become friends and set off together in a fantastic flying car. Both are on the run. Tip is trying to track down her mother (Jennifer Lopez) who has been whisked away by the Boov, along with all the other humans.

Comic legend Steve Martin voices the ever-confident (and with no good reason) leader, and notes that “the fact that a coward like Smek is the supreme head of the Boov points to their naiveté. He fills their egos, but eventually [spoiler alert!] they recognize Smek for what he is: an idiot. But Smek is resolute in his belief that Earthlings are rather simple, and that Smek of course, is a genius.”

But relentless cowardice is not Smek’s only talent; he’s also prone to popping footballs into his mouth, as though they were delicious candy or fruit. In fact, he comes to love (and misuse) many objects he finds on Earth. 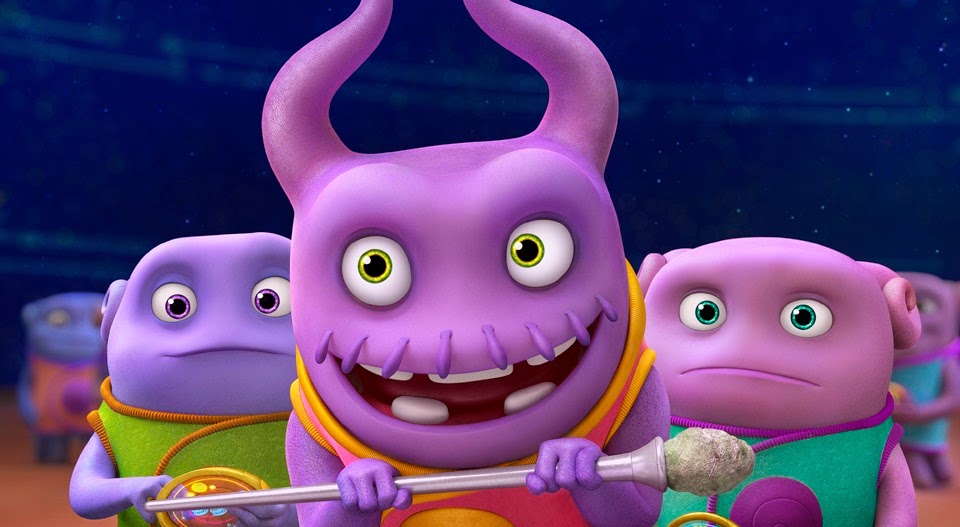 Martin, who is also a noted playwright, says that he loves the acting process in an animated feature because “it’s like writing a play, where you can try something out, change it and go back and experiment with it 70 different ways. So much emotion can be brought into an animated film.”
Like most voice actors, Martin did most of the recording sessions minus his co-stars. But he was impressed by how little this impacted his performance. “You feel like I’ve worked with Jim and Rihanna on HOME for two years, even though my actual time with them was very limited or non-existent.”

For director Tim Johnson, collaborating with Martin was the culmination of an almost lifelong fandom. “At age 16, I sat in the back row of Chicago Stadium watching a distant figure in a white suit place balloon animals on his head,” he recounts. “I’ve admired Steve Martin for as long as I can remember. He’s the kind of comic genius for whom you frame the character and situation, and then get out of the way.”

Martin’s Smek and his Boov minions have relocated much of Earth’s population, including Tip’s mom Lucy, which leads to the young girl (and her traveling companion Oh) to embark upon a global quest to reunite with Lucy. But no one knows better than Lucy that Tip is no ordinary kid, so Lucy has hope. Their separation, Tip’s search, and their ultimate reunion lead to some of HOME’s most heartfelt moments.

A fun-filled, colourful journey for the whole family awaits in “Home” when it opens March 26 in theatres across the Phils. from DreamWorks Animation and 20th Century Fox.