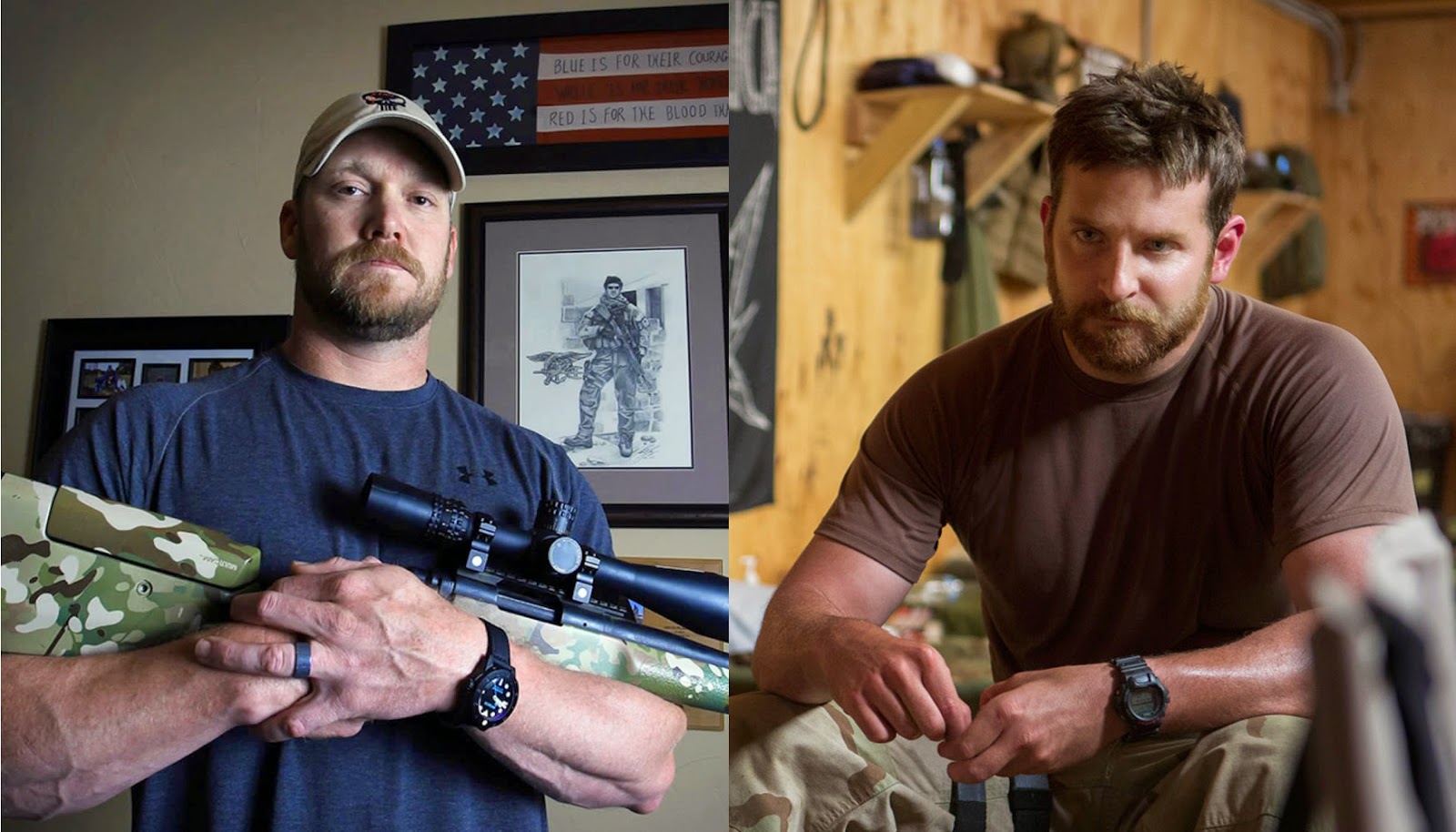 Two-time Oscar-nominee Bradley Cooper (“American Hustle,” “Guardians of the Galaxy”) stars in Clint Eastwood’s “American Sniper” as real-life Navy SEAL Chris Kyle, whose skills as a sniper made him a hero on the battlefield. But there was much more to him than his skill as a sharpshooter.

“In some ways, it’s a universal story about what most veterans have to go through,” explains the actor, “dealing with the seesaw of being in a war zone and then suddenly coming home to a ‘normal’ life. That was very moving to me. I liked the fact that it wasn’t as much of a war movie as it was a character study. And if you look at Clint Eastwood’s films, like ‘Unforgiven,’ ‘Gran Torino,’ ‘Letters from Iwo Jima’…they are all complex character studies, albeit with very different backdrops. So he was absolutely the right director to tell this story in a very raw, truthful way.”

The actor goes on to observe that “American Sniper” and the human drama at its center fit the Eastwood canon: exploring the nature of men for whom violence and justice become inexorably intertwined. “Chris was not a violent man—in fact, far from it—but when called upon, he did not shrink from his duty because he believed the cause is just. His heroism wasn’t just in the number of ‘kills’ he had in war; it was also in how he was ultimately able to confront the intangible wounds of war, not only within himself but on his family.”

Cooper, who underwent a complete transformation to portray the more physically imposing Kyle, remarks, “When Chris says in the movie, ‘I’d lay down my life for my country,’ you know he means it. And then to see the journey he goes on…It doesn’t make him a martyr. It doesn’t make him anything other than just a man. But that’s the kind of man he was.”

In “American Sniper” we get a glimpse of how Chris became the man he was, beginning as a boy in Texas, when his dad first teaches him and his brother about the three types of people in the world: the predator, the prey or the protector. And in that instant, without him even being aware, Chris’s course is set. Cooper offers, “I think Chris is hardwired to be a man dedicated to protecting others and that mission statement is seen throughout his life. In many ways, his protective instinct and the price he pays for it is what the whole movie is about.”

“He was a big, strong kid who believed in fighting for the underdog,” Clint Eastwood says. “That carried into his role as a sniper; his job was to watch over the troops on the ground and keep them safe from an enemy they could not see.” 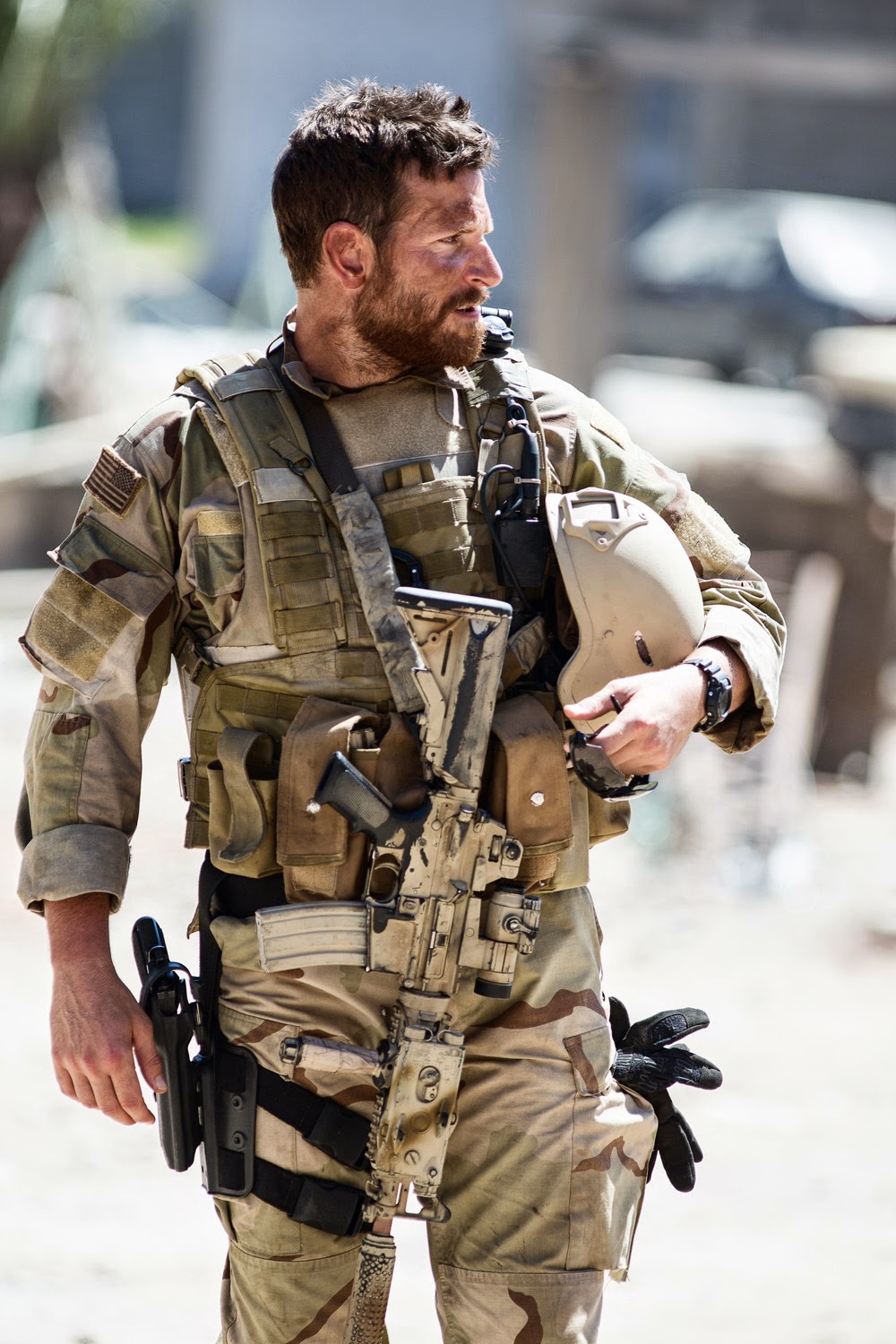 Cooper knew that taking on the role of Chris Kyle would test him both physically and mentally but welcomed the challenge. He notes, “There wasn’t a way to do the movie without being Chris, not mimicking him but embodying him completely. I needed to figure out how he walked and talked and to try to get as big as he was to even begin to get to a point where I could believe I was him because if I didn’t believe it, no one else would either. I watched everything ever recorded of him many times and did as much research as I could.”

The actor worked with dialect coach Tim Monich to perfect Kyle’s Texas drawl. The job of bulking up his frame was more physically demanding, involving a strict workout regimen with trainer Jason Walsh, as well as calorie loading to pack on the weight. “Chris was 230 pounds of muscle and I was about 185 pounds at the time, so it was three months of constant eating and working out. It was tough,” Cooper acknowledges.

“When your system isn’t naturally inclined to go in that direction, you have to kind of work at it around the clock, and he did,” says Eastwood. “I don’t think I ever saw him off camera without some kind of shake or nutrition bar. By the last day, he was saying, ‘Thank God I don’t have to eat anymore.’”

Eastwood also respected Cooper’s complete immersion into the role, stating, “Bradley’s enthusiasm and work ethic was unparalleled. He was totally invested in the job and never stopped thinking about how to make every aspect of the project the best it could be.”

Opening across the Philippines on January 21, “American Sniper” is distributed by Warner Bros. Pictures, a Warner Bros. Entertainment Company.