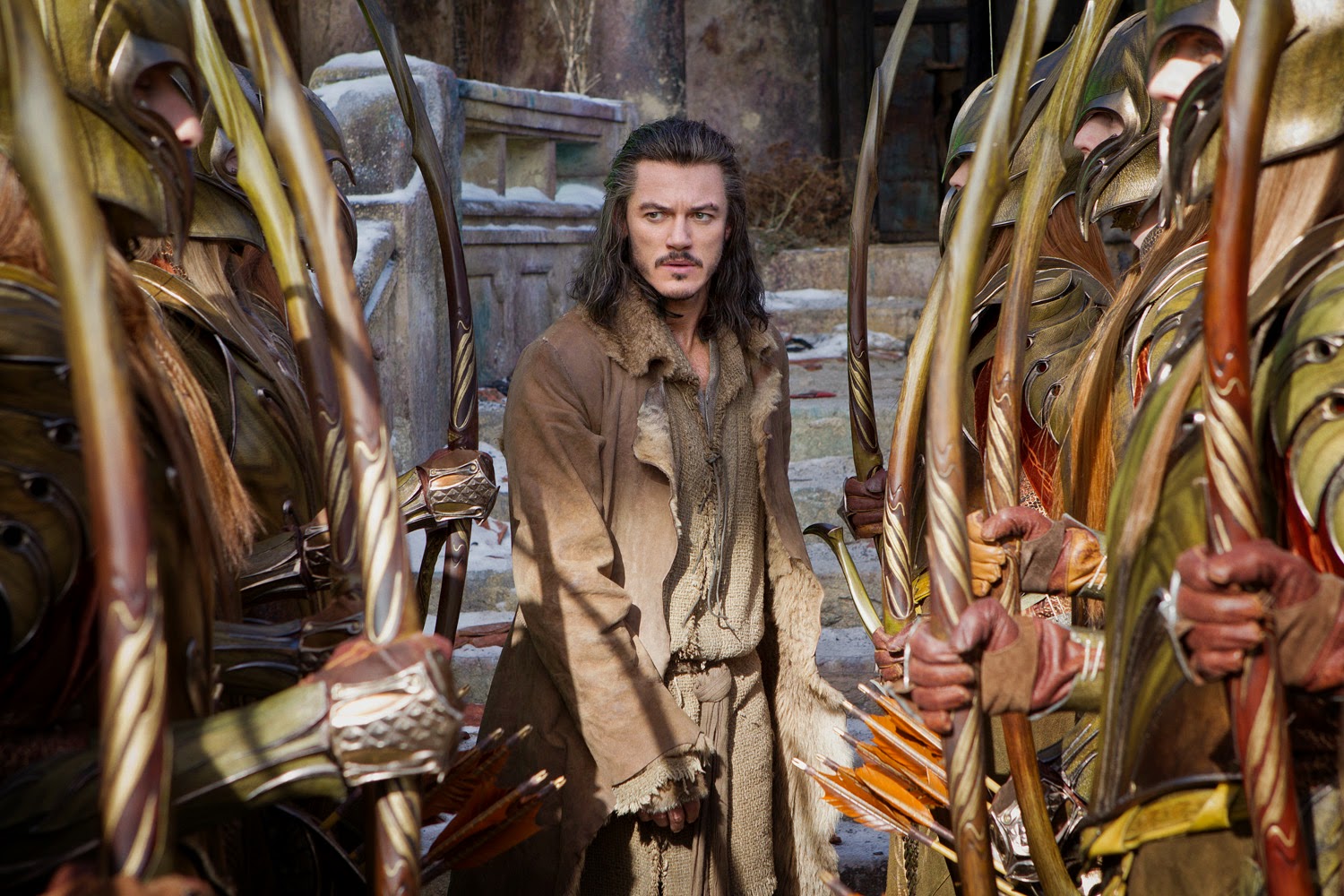 The third and final film in director Peter Jackson’s beloved Middle-earth trilogy, “The Hobbit: The Battle of the Five Armies” brings to an epic conclusion the adventure begun in 2012’s “The Hobbit: An Unexpected Journey” and continued in 2013’s “The Hobbit: The Desolation of Smaug.”

In the final film, the Dwarves of Erebor have reclaimed the vast wealth of their homeland, but with Smaug set loose from its tunnels, they must face the consequences of having unleashed the terrifying Dragon upon the defenseless humans of Lake-town.

But the Dwarves face an equally grave threat from within. Thorin Oakenshield (Richard Armitage) has seized his birthright as King under the Mountain, but has grown increasingly obsessed with only the Arkenstone—and refuses to honor the debts and promises he has made along the way. “Thorin is at his best when he has a plan in action, whether or not he’s been able to carry it out,” says Richard Armitage. “And I don’t think he has a plan for what happens next—which is his descent into the same madness that possessed his grandfather—which becomes the catalyst for the armies that are rallying to the Lonely Mountain to claim their gold.”

Unaffected by the great treasure that has possessed his friend and drawn armies to the foot of Erebor is Bilbo Baggins (Martin Freeman), who is driven to a make a desperate choice to save his friend—not realizing that even greater perils lay ahead.

Gandalf’s (Sir Ian McKellen) warnings of Sauron’s (Christopher Lee) return have gone unheeded, and even as the Elves, Dwarves and Men marshal their forces, the Dark Lord’s armies of Orcs are descending on the Lonely Mountain. Facing an enemy greater than any they’ve ever known, they must decide what is worth fighting for—wealth and power, or the future of their world and those they love.

And Bilbo, the Hobbit who only wanted a little adventure, will find himself fighting for his life as five great armies go to war. 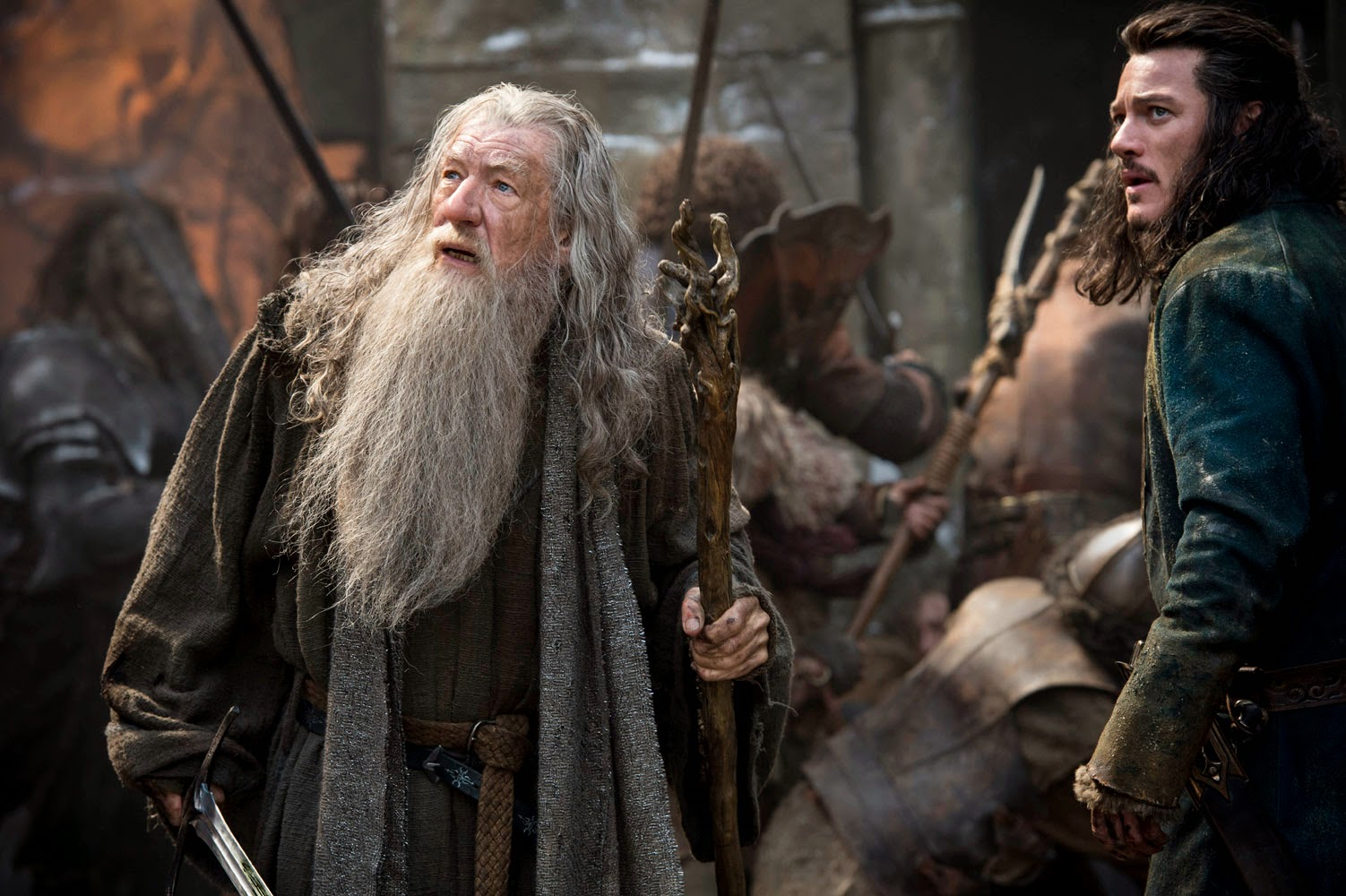 “It’s interesting because, in the end, you see all of this through the eyes of Bilbo Baggins—the everyman who finds himself in the midst of war,” says Philippa Boyens. Boyens is among the screenwriting team of Peter Jackson, Fran Walsh and Guillermo del Toro who shaped the films from the Tolkien novel as well as the appendices the author included at the end of the The Lord of the Rings.

Ask her what the third and final film in The Hobbit Trilogy has in store for audiences and she has one word: surprises. “It’s not a redux of The Lord of the Rings films; it can’t be The Return of the King,” Boyens explains. “It is grittier, it’s grimmer. It is bigger in scale—if you can imagine!—than perhaps even the Battle of Gondor in `The Lord of the Rings: The Return of the King.’”

Ian McKellen returns as Gandalf the Grey, with Martin Freeman in the central role of Bilbo Baggins, and Richard Armitage as Thorin Oakenshield. The international ensemble cast is led by Evangeline Lilly, Lee Pace, Luke Evans, Benedict Cumberbatch, Ken Stott, James Nesbitt, with Cate Blanchett, Ian Holm, Christopher Lee, Hugo Weaving, and Orlando Bloom.
Opening across the Philippines on Dec. 12, 2014 in theaters and IMAX®, “The Hobbit: The Battle of the Five Armies” is distributed by Warner Bros. Pictures, a Warner Bros. Entertainment Company.