Costume designer Sammy Sheldon Differ and head suit designer Ivo Coveney were tasked with designing and creating from scratch all of the practical suits that Paul Rudd would wear in Marvel’s “Ant-Man.”

The first step in the process was deciding on the style and materials that would comprise the suit design. “Because the Ant-Man suit was supposed to have been made in the ’60s, Sammy and I were very keen on trying to make it have an older vintage feel,” explains Coveney. “I’ve deliberately left screws showing how some things are put together because we just felt that it needed to have a strong retro look, but still look cool and modern, which is quite a difficult thing to achieve.”

Differ and Coveney, whenever possible, tried to keep the design as close as they could to the source material and concepts they received from Marvel’s visual development team, headed by Ryan Meinerding. “We tried to keep very faithful to what Marvel had given us because that’s ultimately the goal,” explains Differ. 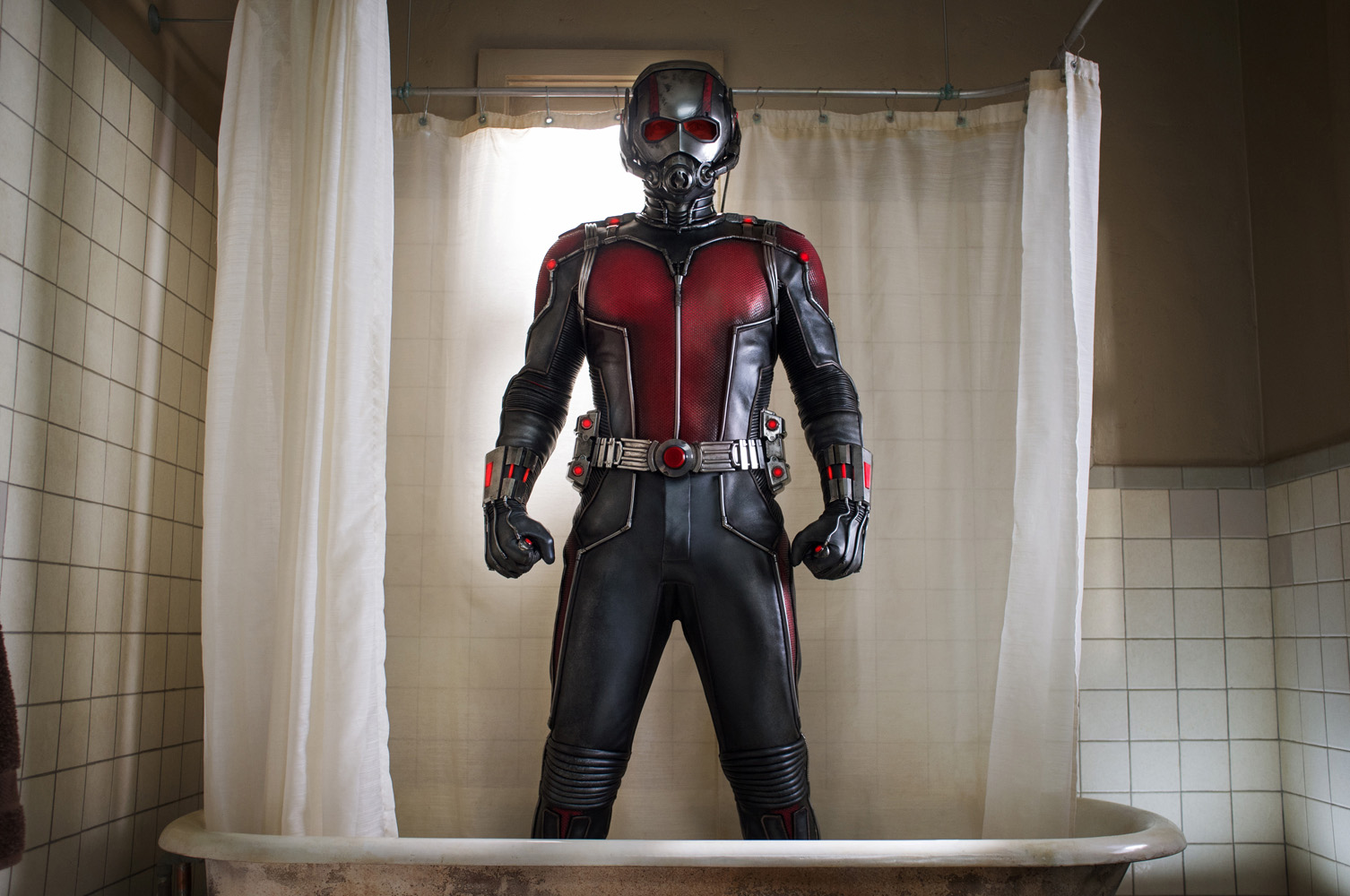 One of the biggest challenges for Coveney was building and perfecting the helmet, which gives Ant-Man the power to control armies of ants. “When you look at the costume and the concept art as we were given, it looks fairly straightforward, but then when you start breaking it down, you start to see just how many circuits there are for lights, you see how much the belt needs to move and all the parts of the helmet as well and you start to say this is not as simple as it looks. In fact it is one of the more complicated suits built for Marvel because everything needed to work practically in this suit and helmet and that became a daunting task.”

For Rudd the “Ant-Man” helmet was one of his favorite components. “When Ivo showed me the helmet and we started trying it on, I thought back to when I first saw the Stormtrooper helmets when I was a kid and I was just like, ‘That’s the coolest helmet ever,’” recalls Rudd. “I had that same feeling with the Ant Man helmet. I thought ‘Wow, the shape of the eyes and the way it slopes and all the wires in the back, there’s something just really cool about it.’ I know if I were a little kid, I’d be drawing that helmet a lot.” 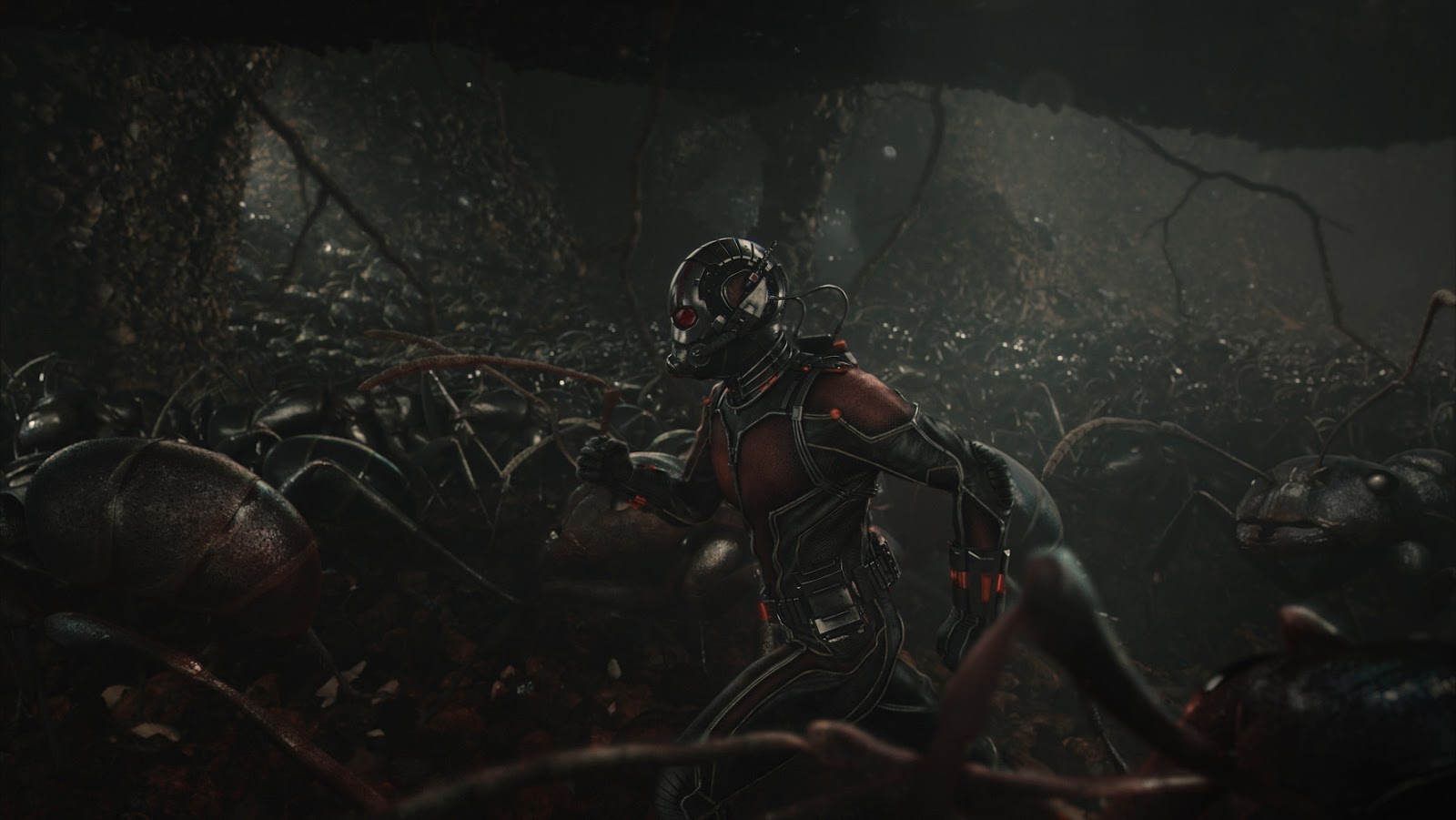 The intricate details of the suit and amount of work that went into it were equally as impressive. “It doesn’t look incredibly complicated to the naked eye when you look at the suit because it’s a lot of leather and it seems like a vintage motorcycle suit,” says Rudd. “But what’s actually happening in that suit, and the number of pieces in the backpack, is crazy. It’s also all wired so that the whole suit, including the gloves and belt, can light up. So there are hundreds of pieces and it takes about 20 minutes to get in and out of it. I need a small pit crew to help me.”

Wearing the Super Hero suit on a daily basis was something that Rudd had not experienced before. The actor describes how he kept his cool inside of the Ant-Man suit. “The only downfall of how cool the suit looked was that it didn’t breathe much,” explains Paul Rudd. “But to their credit they knew that and prepared for it, so it wasn’t too bad. They built cold packs into the suit and they would hook a hose up to the back of the suit to cool you off. But who needs that when you’re filming in Georgia in August? Thankfully, we mostly shot on soundstages during the first part of the schedule, and they kept those things like a meat locker.” 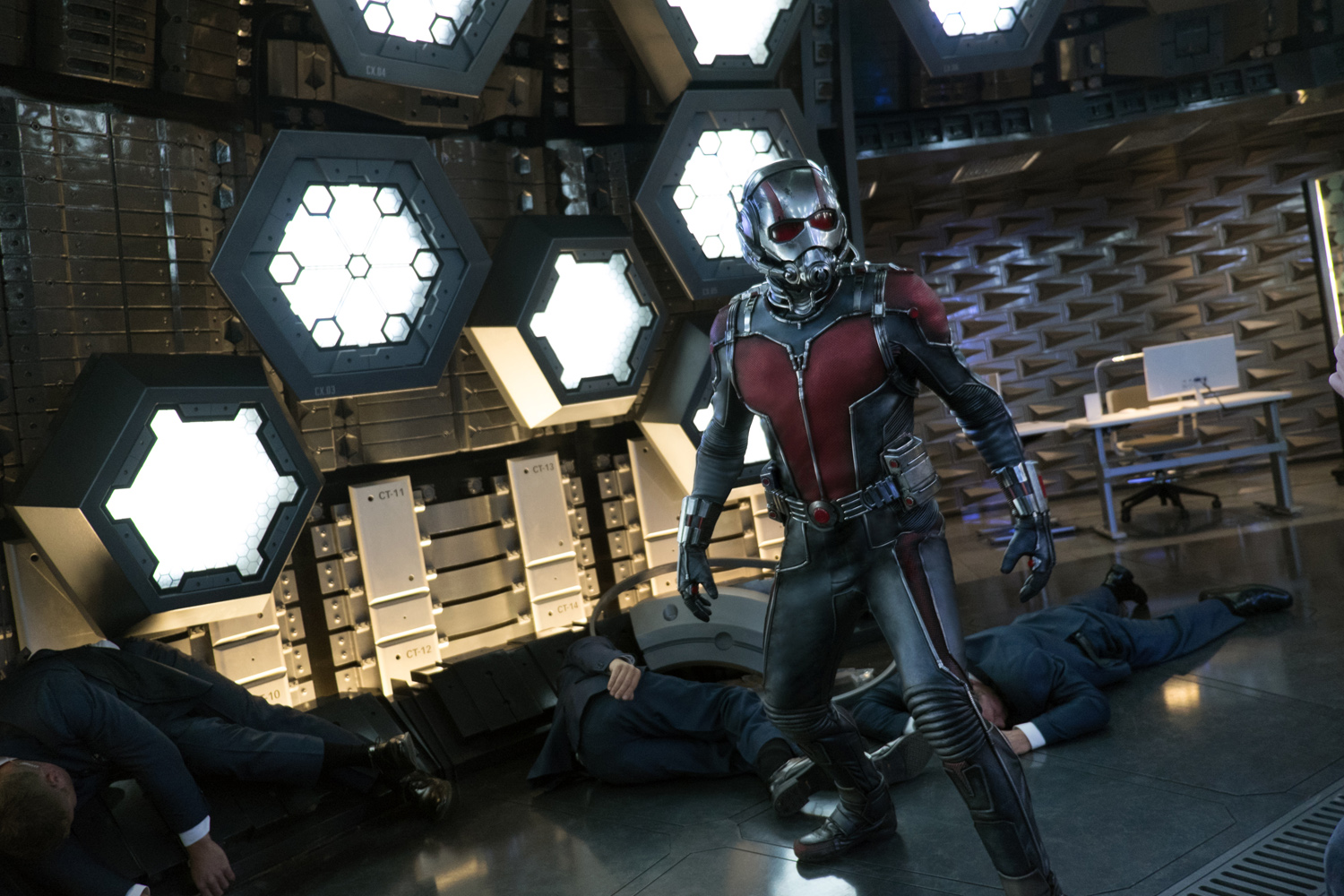 For Differ and Coveney, Rudd’s easy-going nature was a blessing for them and their team. “I think we’ve been quite lucky because the way we’ve constructed the Ant-Man suit he can do quite a lot in it,” says the costume designer. “Paul adopted the attitude ‘I’m in the suit, so I’m staying in it.’ By the end of the shoot we could get Paul in or out of the suit in about 15 minutes, which is quite brilliant. He’s really patient and he loved wearing it and it hasn’t been that difficult for him to be in it for a length of time.”

The filmmakers were all equally impressed with the pair’s work and the remarkable execution of everything that was asked of them, which is reflected up on the screen. Producer Kevin Feige praises, “The costume department on this movie was great and it was a challenge. With the Iron Man suit, there are parts of it that are practical but it’s primarily something that we built later in post, digitally. The Ant-Man costume is not that. The Ant-Man costume is actually a piece of wardrobe that the costume department did an amazing job putting together. Paul Rudd, through numerous fittings, finally was able to wear it with pride and he looked incredibly cool in it.”

Award-Winning Bryan Cranston In R-Rated Family Movie “Why Him”

Compare Orcs & Their Actors in “Warcraft: The Beginning”